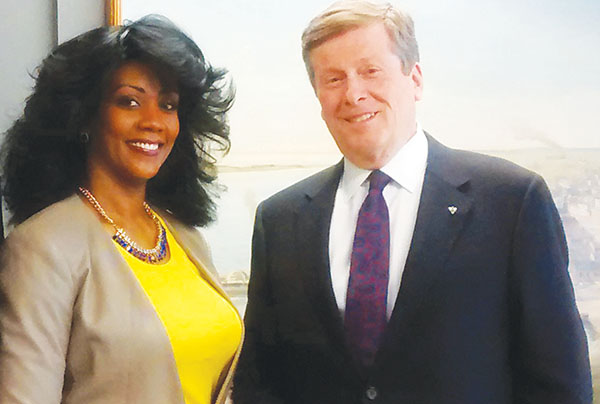 TORONTO, Ontario — Over many years of volunteering as a community organizer and advocate, Gwyneth Matthew-Chapman became aware of myriad of challenges confronting young people. The situation has been drawn into even sharper focus, in the past two weeks, since her appointment as special advisor for Youth Engagement and Development to Toronto Mayor John Tory.

“There’s a lot of work to be done,’’ Matthew-Chapman said, candidly, in an exclusive interview with Pride News Magazine.

“I’ve been able to meet a lot of people who have the influence to change and affect things in the city. I’ve been sort of getting a sense of the magnitude when it comes to the amount of work that has to be done to make sure that young people have the support that they need.’’

Matthew-Chapman assumed her advisor’s role at the city one day after relatives and friends, including former Liberal MP Jean Augustine and former Ontario NDP cabinet minister Zanana Akande, joined her at a birthday celebration at a Toronto restaurant.

She was remembered as a talented young basketball player, who moved to Toronto after living in the United States and Ottawa.

St. Lucia-born Matthew-Chapman credits her father for igniting her passion for volunteerism that has earned numerous formal accolades such as the Queen Elizabeth II Diamond Jubilee Medal for her community service to Canada; a City of Markham Award for Outstanding Contribution to the Community; and the Black Business and Professional Association’s Women of Honour Award for her trailblazing and leadership efforts.

A year ago, Matthew-Chapman was one of the leading volunteers in Tory’s successful mayoral campaign. The friendship between the two began in 2003, after Tory lost to David Miller in his first run for mayor.

“She was, and is, hugely important to me,’’ the mayor said last year in a comment to Pride about Matthew-Chapman. “She is the most enthusiastic and consistent supporter; totally committed every day and full of energy.’’ 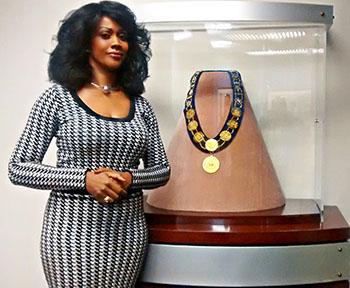 Matthew-Chapman has embraced what she describes as a “transition’’ to the role of special advisor for Youth Engagement and Development.

“There’s a natural feeling that comes with it. This is almost like normal transition work. It’s giving me the opportunity to do more, in a more impactful way; a way that would reach a larger sector of young people in the city,’’ said Matthew-Chapman, who also is a motivational speaker and a television broadcaster and producer.

“There is stuff that has to be done; it’s not going to be easy. So, I’m focused very much on how to make sure we’re doing the right thing to bring about change.’’

According to Matthew-Chapman, the changes required to improved the lives of Toronto’s youth call for the involvement of a collective of champions, “people that are extremely passionate about a particular subject’’.

“It’s not a one-person show,’’ she explained. “To the level of how effective you can be in getting everybody to hold hands and move together forward, that is really what is going to bring about the changes needed.’’

Matthew-Chapman said one of the immediate needs is providing children with support – both in the school and in the community – to build their self-confidence, enhance their skill levels and improve their academic performance in science, technology, engineering and mathematics.

“Whatever we can do to give extra support so that young people are going to be doing well in school is vital. There’s no if, and, but about that,’’ she said.

In 2006, Matthew-Chapman produced the Inspiring Youth Awards – Passing on the Torch, an event honouring African-Canadian icons and achievers.

A non-partisan organization, CBC’s objectives include motivating young people to get involved in the political process, and supporting African-Canadians pursuing political office.

Matthew-Chapman intends to ensure the survival of CBC, including finding a home for the organization.

“We have to start getting more engaged in politics. We need to build a foundation that is going to be responsible for, at least, helping with developing a culture of political inner city engagement amongst our youth,’’ she said.