New in Pride
Home / Business & Money / Four Reasons Why Women Will Lead The Business World In The 21st. Century 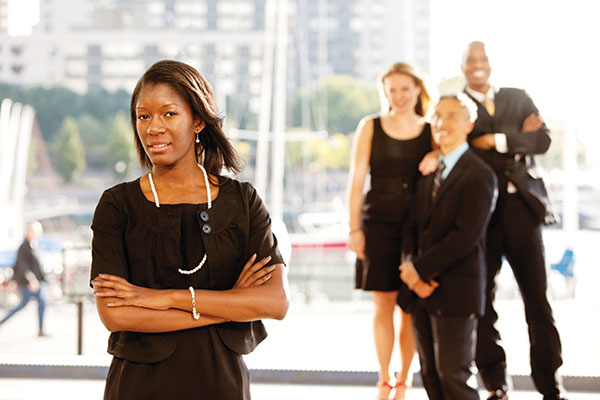 Four Reasons Why Women Will Lead The Business World In The 21st. Century

Photo above: A successful, confident woman, in the foreground, upstages her peers in the background. Photo credit: © Can Stock Photo Inc. — Leaf.

When you let women be women in the business world, they do better. That’s according to a recent report from the Harvard Business Review, which makes the case that traditional thinking – that women should be treated no differently than men in corporate settings – is simply flawed and regressive.

A major point the post makes is that only about 20 percent of businesswomen make partner. By expecting from women what you would expect from men, the corporate world is consciously and unconsciously excluding female leadership.

That’s a very bad thing, according to many. For example, Kevin O’Leary of “Shark Tank” fame says that of his 27 companies, only the ones with female CEOS make him money.

“Women are good for business, so it follows that what’s good for your best women will be good for your bottom line,” says Debora McLaughlin, CEO of The Renegade Leader Coaching and Consulting Group (www.TheRenegadeLeader.com), and author of “Running in High Heels: How to Lead with Influence, Impact & Ingenuity.”

“I’ve long advocated this position, and that symbols of female business identity, like high heels, are signs of a businesswoman’s ability to elevate business results, consistently providing a better return for stakeholders.”

McLaughlin discusses why women will be essential for leading businesses into a new paradigm this century.

“Of course, this is not a strict gender rule,” McLaughlin says. “But I think it’s the experience of many that women are, in the aggregate, more nurturing.

“More importantly, if the Harvard Business Review’s post is an indicator, women in business will feel more comfortable being themselves in a professional environment,” she says. “Unlocking those invisible shackles from a woman’s high heels will be a game-changer.”