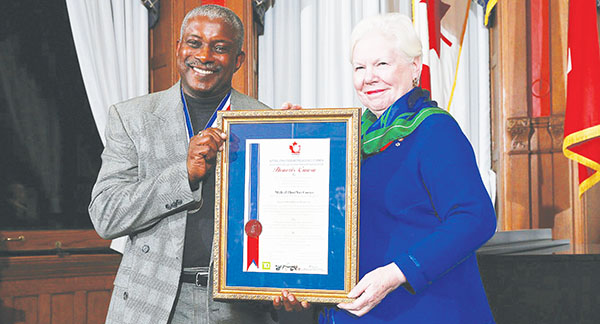 TORONTO, Ontario — Guyana-born Michael Van Cooten, the Founder, Publisher and Editor of Pride News Magazine and Pridenews.ca, was honoured by the National Ethnic Press and Media Council of Canada (NEPMCC), last Friday evening, for exceptional services rendered to his community, in the areas of equality, the humanities and social justice.

The award was also presented to Pride News Magazine’s hard-working and outspoken Publisher, in appreciation of, “Your outstanding achievements and distinguished contributions to cultural communities and your community service, and in recognition of your efforts in promoting tolerance and understanding along with the traditions, and in the interest of, the African- and Caribbean-Canadian communities. Your leadership, courage and dedication to the causes of social justice, human rights and democracy, have greatly contributed to the respect of cultural values and equality among all Canadians.”

Van Cooten, who was nominated for the award by African-Canadian community stalwart, Ned Blair, Vice-president of NEPMCC, was among 35 deserving print journalists, editors, publishers; radio, television and electronic media directors and producers; and individuals, recognized “for their impact in the daily lives of Canadians and their efforts to make Canada a more liberal, just and open society”.

The 2015 edition of the 35-year NEPMCC annual awards ceremony was held in the music room in the Queens Park suite of the Honourable Elizabeth Dowdeswell, Lieutenant Governor of Ontario, who also presented the awards to its recipients. 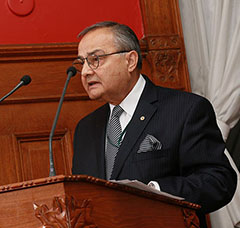 “It is an honour and indeed a distinct privilege, for me and my colleagues to welcome you all today to this recognition of those who distinguish themselves in the service of Canada’s diversity in our great multicultural society, founded on freedom of the press,” said NEPMCC President and Chief Executive Officer (CEO), Thomas S. Saras, in his welcome remarks to the audience.

“By recognizing this evening’s recipients, we acknowledge our appreciation for what they tirelessly do for our communities, and at the same time, we wish them luck and encourage them to continue their wonderful efforts in the future,” he added.

In January, 1983, Van Cooten, who is also the Founder, Chair and CEO of Pride Inc., a media and communications corporation, started Caribbean Life Magazine, which, a year later, changed its name to Pride News Magazine.

Today, 32 years later, Pride has evolved into one of the most read and influential publications serving the Black-Canadian, African-Canadian and Caribbean-Canadian communities. It is also the third oldest Black publication ever, in Canada, behind Share newspaper and Contrast newspaper.

In an email to the organization’s executive committee, expressing his gratitude, Van Cooten — who was made an honourary member of NEPMCC — wrote, “Thanks for bestowing on me, last Friday evening, your organization’s prestigious award.”

“It felt great, satisfying and will serve as somewhat of a technical validation of my 32-year career as a writer, publisher and editor and, in times of challenge — which in the business of ethnic publishing is almost inevitable — I know, that this award, will provide me with the inspiration not only to push through the tough times, but to excel at serving Pride News Magazine’s readers with professionalism,” he added. 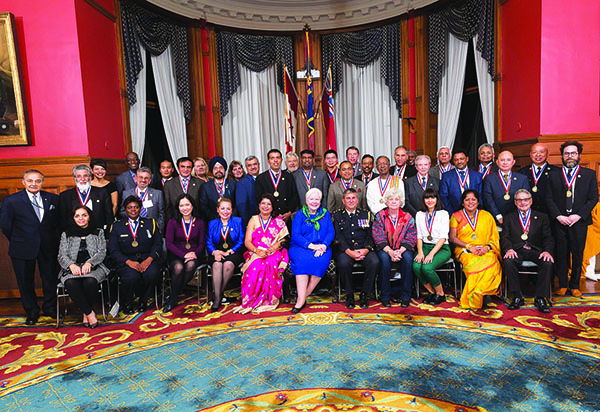 Over its 30 year history, the ACAA has unearthed, recognized and honoured over 400 distinguished African Canadians in a wide variety of vocations, and has inspired thousands of Black youth to pursue and realize their potential.

He is also a seasoned entrepreneur, having started and operated a number of different businesses: the Sales and Management Training Institute; Fashion Flair, a two-store fashion retailer; Distribution Plus Publications Inc.; and You’re Beautiful Beauty Supply, a two-store retail enterprise.

Van Cooten has received numerous awards including: a Toronto Police Services Black History Month award; a Visions of Science “Keepers of the Knowledge Flame” award; a Jamaican Canadian Association (JCA) Community Service Appreciation award; an award of Excellence from the government of Guyana; the Jackie Robinson Fortitude Award; and others.

Van Cooten, who turned 63 in January, has been married to his wife, Donna, for 29 years, has six children — Mykella, Shiren, Yolanda, Vanessa, Donnavan and Narissa — and resides in Whitby, Ontario. 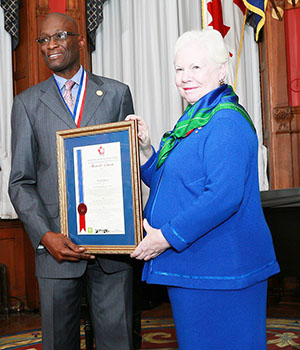 Jamaica-born Royson James, a respected journalist and municipal affairs columnist with the Toronto Star newspaper, since 1991, received his, in the Journalist Category for exceptional service to community media — city politics.

In the category of newspapers, for distinguished perennial service to his community and distinctive achievements in media, NEPMCC paid tribute to Arnold A. Auguste, the Publisher and Editor of Share, the oldest Black and Caribbean newspaper in Canada. 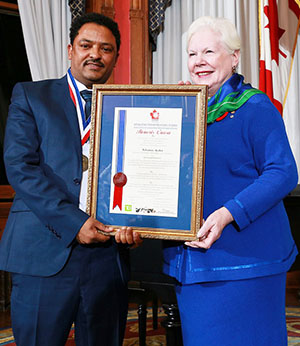 Auguste, who was not present to receive his award, studied journalism at Ryerson University and served in an advisory capacity at his alma mater and other institutions. Today his publication is considered one of the most respected ethnic publications in Canada.

Ethiopia-born Yohannes Ayalew, Publisher and Director of “Ethiofidel.com”, one of the finest publications online, received his honour, in the Radio, Television, Electronic Media category, for Best Concept, Audition and Presentation. 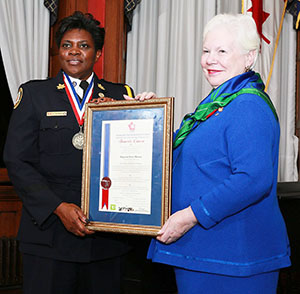 Thomas was also responsible for the security of the recent 2015 Pan Am games, which was held in Ontario.

In his profound remarks, Saras continued, “…..we believe that freedom of expression and freedom of information are important pillars for a successful democracy; and these pillars are the founding principles and of the utmost importance to the members of the National Ethnic Press and Media Council of Canada.

“In the pursuit of these principles, our editors, writers and publishers work very hard to spread knowledge of the world’s events in their neighborhoods, across and between our ethnic communities, to every corner of the planet, to the citizens of Canada and the world.

“Allow me to point out that no corporate entity funds them. They are independently run by professionals who have to work hard in order to serve their ethnic communities. For most of us, producing an ethnic medium is a daily struggle, yet some of us have been successful enough to be around for 40 or 50 years (and more).”