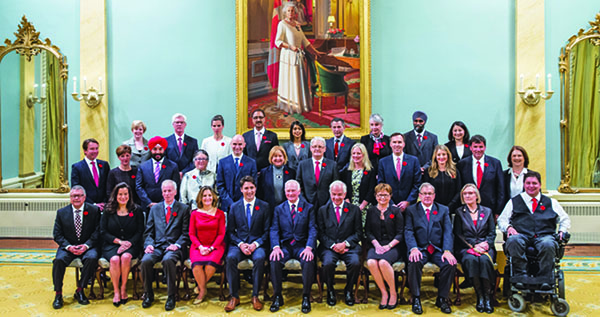 Many African Canadians Upset That No Black MP In Federal Cabinet

Photo above: Prime Minister, Justin Trudeau (seated, fifth from left) and his newly-minted Cabinet, after their swearing-in ceremony. Photo credit: The PMO.

TORONTO, Ontario — Many Canadians were glued to their televisions or computers to watch the swearing in of the country’s 23rd prime minister, Justin Trudeau, and his 30-member cabinet on November 4, but soon after, many Black Canadians took to social media to discuss the absence of a Black MP among the ethnically diverse new ministers named.

Some were critical of Trudeau’s statement to the media after the ceremony at Rideau Hall, residence of the governor-general in Ottawa that, “It’s important to be here before you today to present to Canada a cabinet that looks like Canada,” – given the absence of an African Canadian.

Ensuring that there is gender parity, the prime minister appointed 15 women and 15 men to the cabinet. Some are members of several ethnic groups; there are two persons with disabilities, an openly gay politician and two aboriginals.

Cultural critic, author and journalist, Dalton Higgins, who posted a critique on his Facebook page, said, he just happened to be in a space with many other Black Canadians watching the ceremony and they all had a similar reaction to the prime minister’s statement.

He said, they thought it was interesting that the prime minister made that kind of statement and there was a confused look on all of their faces.

He thinks Trudeau was a little smug and inaccurate in how he articulated a new Canada.

“He could have said, something like, we’re making strides towards moving towards a cabinet that better represents Canada but we have a long way to go,” said Higgins.

Higgins said, someone who is Asian (Chinese, Japanese, Korean) could have been equally offended because there are no Asians in the cabinet either.

“African Canadians represent, we’re a vibrant, thriving community and we represent significant numbers. I think that’s why I was a bit taken aback.”

Five of the eight Liberal candidates of Black, African or Caribbean descent who ran were elected in the recent elections, which saw the Liberals winning 184 electoral districts.

There were 30 candidates — 15 women and 15 men — in total that ran in the five federal political parties: Liberal, Conservative, NDP, Green, and Bloc Québécois. 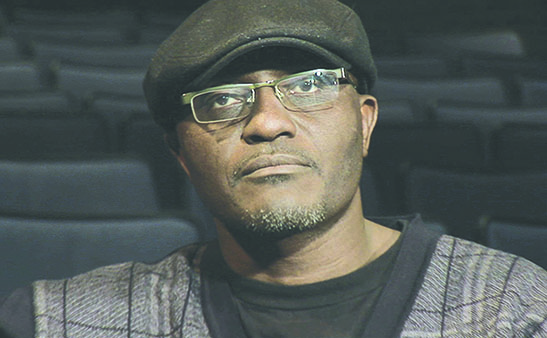 Grace-Edward Galabuzi, Ryerson University associate professor in the department of politics and public administration, notes that there were five Black/Caribbean Canadians and about three East Asian Canadians who were elected but not represented in the cabinet, and yet there are four South Asians appointed.

“There’s an extent to which the Black community really needs to take more seriously the issue of electoral participation, because part of what is killing us is that although we are getting these incidental Black community members elected to parliament or the legislatures, they do not represent a strong political constituency that compels the leaders of these parties to put them in some positions.”

He said, a similar thing is happening with the provincial Liberal government, which has two Black members in cabinet, but the South Asians are doing much better there too.

Galabuzi said, South Asians are doing much better than African Canadians are, in terms of being in key positions.

He said, this is because all three political parties have figured out that the South Asian community – which in numbers is greater than the African Canadian community, but not by much in total — is engaged and involved, and they can make a difference in several constituencies or ridings.

“We have got to take the initiative and we’ve got to use the fact that we actually have significant numbers in some ridings as leverage, but that doesn’t work unless we organize.”

The professor also said, the Black community has “lost ground as the community that was sort of the default community whenever they were talking about minority issues.”

The research associate at the Centre for Social Justice in Toronto said, members of the Black community need to be at the cabinet table to be effective.

“This is a big deal. It’s a big deal that we’re no longer the community of reference because a whole lot of the historical struggles around immigration, human rights, — those struggles were waged by our people and the coalitions that emerged involved our people. This generation really has to assume some responsibility around that kind of leadership.”

In the lead-up to the general election, the Coalition of Black Trade Unionists, Ontario Chapter (CBTU) was involved in a campaign, “Black Votes Matter,” to encourage African Canadians to participate in the electoral process.

“I think that more of our community went out to vote and voted in the traditional way. On Election Day, I was still hearing that Trudeau [Pierre] had done lots for us and therefore folks were going to support. I also think that when the results came in from the Atlantic, folks rushed to the polls,” said Marie Clarke- Walker, a member of the executive of the Coalition of Black Trade Unionists, Ontario Chapter (CBTU) who is attending meetings in Geneva, Switzerland.

“Lots of promises were made, so now we have to hold his feet to the fire but we are off to a half decent start — long form census, refugees, no Bill Blair in the cabinet and door to door mail delivery. The community now needs to keep in touch and make sure our needs are heard and met,” she said.

Trudeau, 43, is the second youngest prime minister in Canada’s history. Parliament will resume on December 3 and the Speech from the Throne will be presented on December 4.