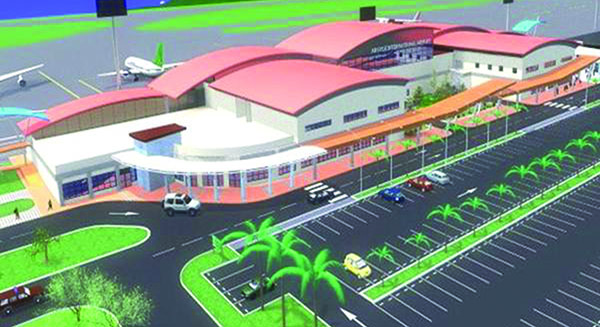 Photo above is an artist impression of Argyle International Airport.

KINGSTOWN, St. Vincent (CMC) – No one doubts that the Argyle International Airport will have a significant role in the outcome of the December 9 general election.

Both the ruling Unity Labour Party (ULP) and the main opposition New Democratic Party (NDP) has made the EC$729 million (One EC dollar =US$0.37 cents) airport a major issue in the campaign for the election.

Prime Minister Dr. Ralph Gonsalves, who is seeking a fourth consecutive term in office, has referred to the facility as a major achievement of his administration that first came to office in 2001 and promising to provide the island with direct links to the international community.

On Thursday, he is moving one step closer to that dream, when a small plane will be used to test the night landing capabilities at the airport.

“There is going to be a small plane, which is going to do a test flight, testing the approach lights at the Argyle International Airport. And I have asked them if they will allow me to come on that flight, and I ask them if I can bring along the Humble African,” Gonsalves said in reference to Frederick Stephenson, the parliamentary representative for South Windward, where the airport is located.

The airport has missed several completion deadlines since 2011, but an upbeat Gonsalves, said “remember they say nothing could land there you know”.

Gonsalves has praised Venezuela for the role it has played in ensuring the facility was built and would put an end to the frustration that many nationals have in travelling to and from the country.

He said at a time when many countries, including Canada and the United States, had baulked at the idea of providing support to Kingston for the airport, Venezuela and Cuba were among a handful of countries that assisted.

“And we have come a long way since then, and as you see it, it is a magnificent structure. Imperialism didn’t believe it would happen.

“It was in the middle of the world economic recession when we started. Europe said no assistance, the prime minister of Canada I wrote him, no assistance, the Americans I spoke to them no assistance, but Fidel (Castro) said yes, (Higo) Chavez said yes,” he said at a function in welcoming Venezuela’s President Nicolas Maduro to Kingstown.

“And what it shows is that even in the most difficult circumstances internationalist solidarity among friends will always triumph, that’s a lesson of this airport,” Gonsalves said, criticizing also his political opponents who had also chastised the project.

NDP and Opposition Leader Arnhim Eustace has said that the test flight on Thursday is nothing more than political grandstanding given that much more work remains to be done, including paving the remaining 40 per cent of the runway.

Eustace, speaking at a rally in Layou over the weekend, said that his party’s position on the airport is contained in the manifesto released on the Internet last week.

In the manifesto, the NDP said that “it is now clear that the undertaking to build an international airport at Argyle – the largest ever capital undertaking in this country’s history – has been completely mismanaged by the present government”.

It claims that from its inception, the undertaking was poorly planned; sufficient funding never existed to cover the cost of the construction and its implementation was badly organized and shoddily executed.

“As a result of these critical shortcomings, a project that should have taken three years to complete is now approaching its eighth year and its cost has ballooned from EC$482 million to more than EC$700 million.

“In fact, Vincentians do not know the true cost of the project to date, because no financial statements relating to the undertaking have ever been submitted to the Parliament. What is worse, the present government has consistently attempted to mislead the people of this nation about the cost and the status of this project – and is still doing so.

Eustace told party supporters that the “burden” of completing the multi-million dollar project “is going to fall on the New Democratic Party.

Eustace said that consultants hired by the NDP estimated in 2008 that the airport,  will cost EC$1.1 billion, significantly more than the government’s estimate.

“When the government was saying 400 hundred and something million, our consultant was saying $1.1 billion. Well they reach 800 and they have plenty things to do still,” he told supporters.

But Gonsalves insists “we are on the verge of opening it and that is what will be done on Thursday” suggesting that the ruling party will hold an event to coincide with the test flight.

“I tell you this, I read and I hear what Eustace said ‘that he will have to go to an international company to get the money to finish the airport, but first, he will study it.

“And he said in New York that he doesn’t think it can open until 2020. Well, that is if you make the mistake and elect them,” Gonsalves said.

Gonsalves was also critical of plans by the opposition to keep the existing E.T. Joshua Airport, functioning until 2020.

“Why would you want to keep E.T. Joshua functioning until 2020 if you’re not intending to keep Argyle waiting until 2020,” Gonsalves said, adding “but I want to tell you I have all the money to finish the airport because there is very little that remains to be done on the airport, and the airport will be finished soon and open quite soon.”

Gonsalves noted that Parliament has approved a loan for five million US dollars from a bank in Taiwan, adding that all the documents have been signed on that loan.

He said the same procedure was used to acquire US$16 million through any agency of the United Kingdom government and the documents were signed and the equipment has been received.

“We have all the money, we don’t need no money from no international business company that Eustace them talking about. We don’t need none of that money. We gone past that long time, and, as you’re seeing, everything at the airport is winding down and we are finishing. And that is the realty. But nobody is going to get me to open the airport before I dot every ‘i’ and cross every ‘t,’” Gonsalves said.

The government has yet to name a single airline that has agreed to fly to Argyle, even though it has been saying that airlines have lined up to service the airport.

“Glen Beache (head of the Tourism Authority) has just come back from Canada and he has given a report on the airline from Canada which is coming; similarly, out of America – at least two airlines; and also from Europe,” Gonsalves said, but did not name any airlines.

“So, I want to tell you this. And when you hear them talking, leh me emphasise this: when you see Vincy Heat plays the United States of American in September next year on what is the Labour Day weekend in the United States, we will have Labour Day weekend here and the planes shall be coming, the big jets, and landing at Argyle International Airport to bring people from overseas to see Vincy Heat play America here in St. Vincent and the Grenadines,” Gonsalves said.