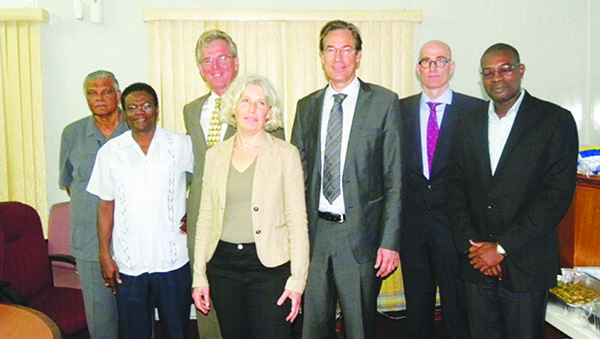 GEORGETOWN, Guyana (CMC) – A three-member team from the Dutch Risk Reduction Team (DRRT) left here Friday after presenting recommendations to the Guyana government on how to deal with the country’s drainage issues.

Public Infrastructure Minister David Patterson said that the observations made were “very informative” and that he was impressed that, in just a few days, the team had managed to make spot on assessments of Guyana’s situation.

He also thanked the delegation for its frankness on the matter, adding “we don’t see it as a critique; it’s all a learning process,” he said.

Patterson said he was in support of some of the recommendations and would await the final report. He also thanked the Ambassador of the Kingdom of the Netherlands, Ernst Noorman for his assistance.

The DRRT leader, Rob Steijn noted that The Netherlands has had significant experience in drainage since it, like Guyana, the country is low-lying.

“Everything was arranged extremely well; it could not have been better. All persons we met were very knowledgeable and dedicated,” he said at the end of the four day visit.

Steijn outlined six recommendations, including the need for an upgrade of Guyana’s drainage on both a technical and managerial level, adding “if you don’t manage it properly, the system will fail and if your water system fails, your country will fail”.

He said Guyana’s water system needed to be crucially addressed and that short-term improvements, such as small-scale dredging, are possible.

“The main message is that we need a holistic approach,” he said, adding that the issue must be attacked on all levels, from the planning stage right up to the enforcement of legislation. He said too that an integrated approach involving all stakeholders was necessary.

“A participatory approach leads to much more progress and faster implementation in the end,” he said, noting also that “there were good things and other things that need some improvement.”

During their stay here, the Ditch team met with various stakeholders and according to a government statement, they discussed the “causes of flooding in Guyana, an increase in impervious areas, infilling of drains, use of drains for refuse disposal, establishment of illegal housing on draining reserves, relative rise in sea levels and inadequacy of secondary and roadside drainage systems.

“Also of significance was the recognition that flooding has increasingly worsened over the years, with the second highest amount of rainfall in decades being recorded in July 2015; 8 inches of rainfall in less than 24 hours”, the release added.