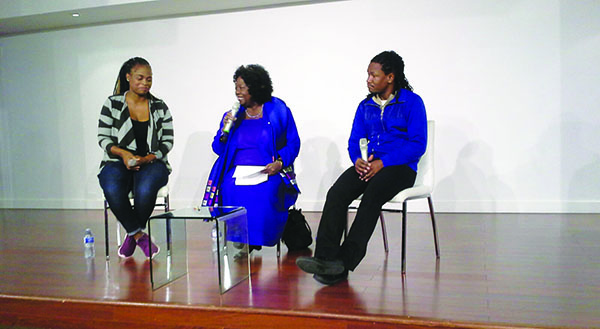 The Soweto Gospel Choir glided on the wings of angels, into the packed Sony Centre, and mesmerized the audience with fascinating voices. The concert showcased the best of, and the inspirational Power of African Gospel Music during their December 4th Christmas concert.  Hailing from South Africa, the singers energetically, and rhythmically wooed their presence into the hearts, of the audience, with folk songs, calypsos, and Christmas carols.

Touring and performing under the directorship of Ms. Beverly Bryer, the choir represents the voices from several churches in Soweto. It is no wonder they have such an engaging and inspirational story to share with the audience. Although the theatre was packed with a crowd excited to hear their hopeful songs, the audience were also treated to the choir’s story – a story of commitment, adventure and professionalism, one that emerged from the depression and suppression experienced by many citizens of their home country.

In 2002, an Australian producer was hosting a show called “Umoja” that showcased different styles of South African music. He loved South African gospel music in particular, because of how much it could touch an audience. Auditions, led by Beverly Bryer, soon were held for a vast array of performers from different churches. One by one, their ability to sing, dance and play instruments were tested and only the best were selected. Over the years, the choir has collected many achievements and now boasts many talented performers including Sipho Ngcamu, who auditioned as a drummer.

Nicamu was born and raised in the streets of Soweto. As a young boy he knew little about the politics nor apartheid in the country but he remembers playing hide and seek with other school boys not knowing it was practice for when cops would raid their houses. But as he grew, he learned the history of South Africa, and understood more about the culture. In times of anger, South Africans refrain from singing, but when they are happy,  at school, at funerals, when a child is born they sing and dance in celebration. Music plays a major role in South African society. So for a choir of South Africans, singing was already so much a part of their lives. Thirty six members were chosen, and their first album was recorded in November 2002. They began touring in 2003, as their fan base grew, so did their tours to Australia, the U.K., France and Spain.

Not all members of the choir read music, and for many it is not a requirement. The songs performed are songs that have been passed down through the ages, and the dance steps flow naturally. The choir has a six piece band, and many are so professional with years of experience, they play by following rhythms without the need for musical notes on a sheet.

Costumes are often brightly coloured representative of African culture; a rainbow nation. Although, one seamstress is in charge of the costumes, a group of ladies will take the costumes to their own homes and work on the intricate beading.

Connecting With Greats: Mandela and Tutu

Former President Nelson Mandela was like a father and a friend to the Soweto Choir. After enjoying the Choir’s CD, Mandela invited them to perform at his daughter’s wedding. They soon became Mandela’s choir of preference, using them for many occasions because he knew they comforted and connected with the struggle of South African people. Similarly, Desmond Tutu to them, was like a priest, attending the same churches, parties, wedding and funerals as many choir members. Together, they were a part of one community.

“Ubuntu”: Humanity Towards Others

Although choir members are from different churches – churches that have many different styles – the choir operates more like a family than a group of colleagues. They party together, they enjoy functions together, help each other at their individual houses and most of all they pray together. What connects them is their talent and their shared worship to one God. To be a part of the choir one must be working for the Lord, worshipping the Lord and they use their talent that has been given by God to do so. Some onlookers may find their dance moves risqué, but to them, their dancing is also a way to worship and is an expression of their happiness. Together, they have a rhythm. When one steps they all step at the same time.

The Soweto Gospel Choir values their community and gives back. They work in primary and secondary schools to mentor children and encourage them to also do something that is inspirational. Music is passed down from grandparents when one is young. And when one gets older it is their duty to pass on their knowledge to the younger generation. Many of their mentored students do not have grandparents or parents to teach them, so the choir members take on that role. Many students are now aspiring to be choir members when they are older.

The Soweto Choir also supports the “46664” charity to help orphaned children who are HIV positive. Many children are in need of medication, food, clothing and shelter, and the proceeds collected by the choir can make a significant difference in the lives of these children. This charity gives them a chance to have a life.

As Dr. Augustine rightfully said in her introduction, the Soweto Gospel Choir are like diamonds. Diamonds originate from the ground, a place thought to not be appealing nor pleasant. But once a rock is crystalized under immense pressures and temperatures, it erupts and becomes a beautiful rare and coveted treasure. The choir’s diamond status has been acknowledged by their loyal fans around the world. And after the harmonious, hopeful and inspirational songs and story of this December 4th past, they have surely gained more devoted fans this Christmas season.