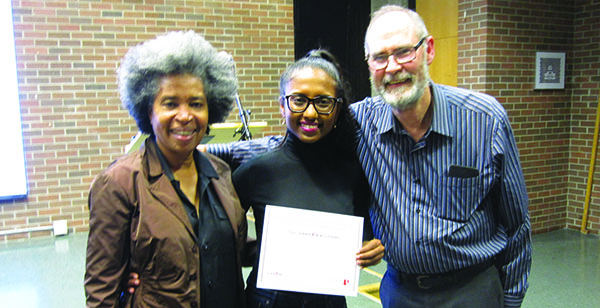 TORONTO, Ontario — Savitri Persaud, a PhD student, is the recipient of the Grace and David Taylor Graduate Scholarship in Caribbean Studies presented by the Centre for Research on Latin America and the Caribbean (CERLAC) at York University.

Her dissertation is entitled: ““Madness” and the Caribbean Psycho-Spiritual: Understanding Gender, Psychiatric Disability and Violence in Guyana.”

The $5,000 scholarship is intended to support PhD students at York University whose research is related to Caribbean studies so that they might focus on research during the fieldwork phase of their studies or while writing their thesis.

Recipients are selected based on academic excellence, significance of proposed research, likelihood of completion, and financial need.

The scholarship was presented to Persaud at the 3rd annual Diana Massiah Lecture in Caribbean Studies, organized by CERLAC, which was held at Founders College, at the university on November 19.

“The dissertation itself is taking up the way that Guyanese talk about madness and mental health and the everyday associations and the everyday practices. And so, in the vernacular, when people display certain behavioural expressions that we don’t deem normal, or as we say in Guyana ‘narmal’, oftentimes the label that’s pinned to their bodies is that they are mad bodies,” said Persaud.

She said there is also an association that is made between madness and spirit possession.

“In the vernacular, it is easy to make that step when saying that one is mad and making that leap to ‘Well, Jumbee got them’ — demons have possessed them – and using that kind of language to frame different bodies.”

She used a couple cases as her points of departure; one involved a woman in her 50s living in Guyana who was diagnosed with a mental illness, who received treatment from the psychiatric hospital “colloquially known as the “madhouse” in much of the English-speaking Caribbean and she had a tendency of wandering away from her home village to neighbouring villages.”

Persaud said one morning the woman wandered into another community before dawn and was misrecognized as an “old higue.”

“An “old higue” in Guyanese myth and folklore is a creature, oftentimes is a middle-aged woman that transforms into a creature and is able to turn herself into a ball of fire. She sucks and drains the blood of infants; it’s a vampiric figure. It’s a figure that reappears in other parts of the Caribbean as well. She’s known as the soucouyant in Trinidad and there are other interpretations and manifestations of this character.”

Persaud said the woman was asked to identify herself but was unable to do so but moaned, groaned, and made noises.

A neighbour ran out of her house and sounded an alarm that there were bite marks on her child’s chest and so there was a lot of fear and panic.

“This woman was surrounded and beaten very brutally and was killed, and her body was left on the side of a dirt road. There was a manicole broom found next to her and there were grains of rice that were surrounding her body.”

Persaud said what one does when they catch an “old higue” is “to beat and kill and maim in very particular ways as the myth instructs.”

She said this was a material consequence of that myth being played out on this woman’s body.

“This case was the point of departure that made me wonder and think about what are the connections that we are making between madness and spirit-possession and what are the consequences of making these kinds of associations.”

Persaud was in Guyana in 2014 conducting interviews and at the end of November a young woman who was also receiving treatment from the psychiatric hospital was staying with her godmother.

According to the way in which she was found, said Persaud, there was a belt tied around her neck attached to a headboard and the newspapers reported that a ritualistic beating was meted out against her.

The report said the woman’s father was the pastor of a church and that community members noted that there were oftentimes beatings of people who were considered possessed at the church.

She said it is important to think about the role that religious leaders play in the community.

She interviewed religious leaders of the Christian, Hindu and Muslim faiths, spiritualists and obeah people as well.

“All the folks that I interviewed condemned any kind of violence. There was a firm belief that there is good and evil and evil can manifest and take itself into people’s bodies. But there was also a sense of wanting to know more about mental health interventions and what they could do when people came to them seeking counsel.”

She said Guyana’s capacity to deal with people who have been diagnosed with a mental illness is very small.

Persaud said Guyana is not a Hindu or Christian nation, but it is a religious place of many different religions which requires one to be conscious of the important role that religion and religious leaders play in these communities as well.