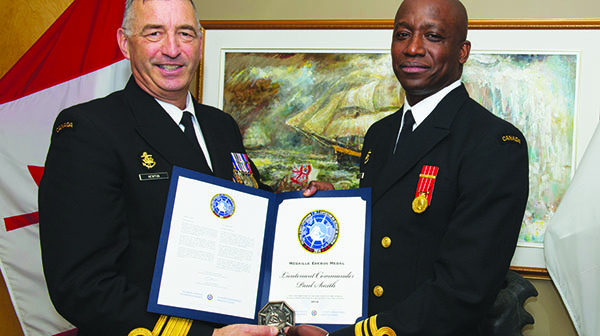 In summer 2014, when then Prime Minister, Stephen Harper, announced, while on the ship, HMCS Kingston, in the Arctic that he was certain the ships of the ill-fated Sir John Franklin expedition, HMS Erebus and MMS Terror, would be found, very few people knew that an African Canadian was involved in that historic discovery.

Harper was aboard Her Majesty’s Canadian Ship (HMCS) Kingston, which was under the command of Jamaica-born Lieutenant Commander Paul A. Smith, 48, who took over the helm of that vessel in Halifax in July that year.

On December 14, 2015, LCdr Smith, Commanding Officer of HMCS Summerside, was presented with a medal by the Royal Canadian Geographic Society for his role in the search for the ship, Erebus, which was part of the Franklin Expedition.

The wreckage was found on September 7, 2014 using a remotely operated underwater vehicle acquired by Parks Canada.

Sir John Franklin set out on his 4th search of the North-West Passage from Europe to Asia on May 19, 1845 but his crew became locked in the ice and eventually they all died.

“It was a great feeling, it was a great opportunity to participate in something historical, fortunate to be on the team that was the group that actually found it,” said LCdr Smith.

When the wreckage was discovered, Harper noted that for more than a century this had been a great Canadian story and was the subject of scientists and historians and writers and singers.

One of the other missions LCdr Smith had, as lieutenant commander of HMCS Kingston, was to participate in the then prime minister’s northern tour.

For the first part of the search, Harper and his staff embarked on Kingston and once that was completed, LCdr Smith and his team transit down the Victoria Strait area to help in the search.

He said unfortunately the thickness of the ice that particular year prevented Kingston from getting into the proper search area.

But they were able to transport some of the scientific gear that was used in the search by a couple of the ships to another vessel that was able to break through the ice and make it into the area to conduct the search.

“As for Kingston, we then participated in survey operations in charting the rest of the Erebus passage,” he said.

LCdr Smith was born in Lionel Town, Jamaica and immigrated to Canada at the age of six, with his parents.

Initially, he grew up in the Eglinton Avenue West area, and then moved to North York in his early teens and Scarborough in his later teens.

He has an older brother and sister who live in Toronto and his younger sister lives and works in Atlanta, Georgia.

“Taking command is probably the best job in the navy. It’s very rewarding for me to receive command of the ship in that it’s a result of the hard work that was put in to attain that position and the sort of trust that has been put in me by the seniority of the navy. And, of course, the trust that’s been placed in me to look after both the ship and her crew.”

LCdr. Smith said when he took command he hadn’t thought about the ‘first’ that he was becoming.

“It was a few months later that someone had mentioned to me, in a roundabout way, they’d been checking and was unable to find in any Canadian history that there had been a black commanding officer so that’s when it was first brought to my attention,” he said.

In July 1986, he enrolled in the Canadian Naval Reserve as a naval combat information operator at HMCS York.

At the time, he was 19 years old and looking for a summer job. Someone had mentioned to him that being in the naval reserve was a great opportunity “to learn some life skills, learn about the navy and, of course, serve your country.”

Once he had gone onboard ship years later, he started falling in love with the organization and the opportunities that it afforded, eventually becoming a non-commissioned member.

After completing his General Military training the following summer in Halifax, he liked the city and applied to Dalhousie University the following year.

His initial plan was to be in Halifax for three years, finish university, and then to move back to Toronto.

“While I was at Dal, I took my first full time contract with the navy and enjoyed being at sea and pretty much stayed there ever since.”

Like other HMCS ships, the Kingston class of ships is usually at sea in excess of 140 days a year.

LCdr Smith conducted training in several reserve vessels between 1987 and 1992 before being posted to the Minesweeping Auxiliary vessel HMCS Anticosti in 1993.

He left Anticosti four years later and was posted to the Kingston class coastal defense vessel, HMCS Whitehorse, as the senior NCIop and a member of her commissioning crew.

In 1999, after attaining the rank of petty officer second class, LCdr Smith was nominated for and obtained his commission to the rank of sub-lieutenant.

In 2000, LCdr Smith earned his Bridge Watchkeeping  (BWK) certificate in HMCS Kingston, the same ship he would eventually command.

He was subsequently posted back to Canada’s East Coast Fleet where he served in several positions in each of the Canadian Armed Forces Fleet Atlantic (CANFLTLANT) Kin class ships including as executive officer in HMC ships Summerside, Moncton and Shawinigan.

His shore tours included time as deputy mine warfare officer at the Fifth Maritime Operations group; Canadian Fleet Atlantic Port Security Unit operations officer, where he was responsible for planning and executing waterside security for visiting foreign naval units; and as executive officer of Minor Warship Sea Training which provided operational training and evaluation to Kingston class vessels and their crews.

LCdr Smith was promoted to his current rank in 2010.  In 2015, he transferred to Command of HMCS Summerside.

Smith said he was fortunate enough to have a lot of mentors in the navy. He said there are a lot of people there who want a person to succeed and a lot of senior people that are willing to provide the support necessary to do so.

One such person is Captain Navy Chris Ross who is a friend of his from university and joined the navy at about the same time as he did. Ross progressed up the chain quite quickly and at every turn was willing to support LCdr Smith.

LCdr is also proud of commanding the HMCS Kingston ship in the Arctic and conducting work in literally uncharted waters. “We were doing surveys in areas that had never been surveyed before, so from an explorer point that was amazing.”

Recently, he took the Kingston class of ships across the Atlantic.

HMCS Summerside was the first Kingston class to enter the Mediterranean and conducted mine counter-measures training with the Standing NATO Mine Counter-Measures Group working with 8 different countries and several different vessels to move the yardstick in so far as mine warfare training for the Canadian navy.

He met his wife, Mary, when he was onboard so she is accustomed to his long stays on the seas.

LCdr Smith says, he is fortunate because she understands and supports what he does. Now that his sons, Colin, 19, and Matthew, 14, are older, he is a little better at home than when they were younger and he was away.

“So, for me, it’s always what I’ve known. It’s a great honour to be able to say the first Black Canadian to command a RCN vessel,” he said, when asked again about the significance of his historic position.

LCdr Smith added, it shows that in the Canadian armed forces there are no barriers preventing anyone of any ethnicity, race or gender to succeed in their goals, as long as they’re willing to put in the work.

The last time he was in Jamaica was about 10 years ago, however, he has an upcoming deployment in the Caribbean and he’s trying to see if he can get his ship to the island.

In his spare time, LCdr Smith enjoys playing and coaching basketball, as well as volunteering with a local charity organization.