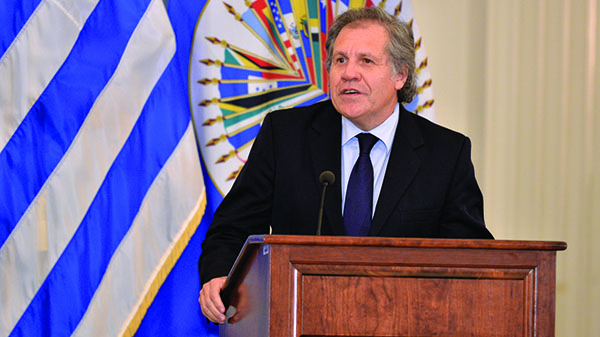 WASHINGTON, DC (CMC) – The Secretary General of the Organization of American States (OAS), Luis Almagro, says, justice and ethics are essential in the relationship between governments and the opposition in the hemisphere, including the Caribbean.

“Justice and ethics must be the rules that guide the coexistence between countries and, within each country, they should be the basis for the relationship between government and opposition,” said Almagro in his New Year’s message, adding: “Let’s ensure that, during 2016, peace and justice are coherent with each other and with the meaning of life of the peoples of the Americas.”

Stating that no one can speak for the people, because the people speak for themselves, the OAS chief said “we cannot be neutral to the controversy, because democracy gives us the freedom and the responsibility to speak with courage to represent indispensable values and principles.”
He applauded all the elections held in the Americas in 2015, pointing out that “all have meant much to the strengthening of democracy.”

Almagro “especially” congratulated Venezuela, asking that “no one distort the voice of the people and its most genuine expression – which is the election results – with schemes of dubious legality, or claiming biased decisions to bodies reconstituted ad hoc.”

At the same time, he said arrogance should also not be used, stating that peace and dialogue “should be the guiding forces.”

Additionally, Almagro said the right to denounce irregularities “does not rely on the partiality of entities with new members of recognized political party affiliation,” calling for the redoubling of “the fight against impunity to protect democracy and human rights.

“And we must ensure the honesty of the governments and the rights of the governed,” he said. “We must defend all human rights without specific beliefs or ideologies, because human rights violations and repression are made from the right and from the left, and are manifested in each journalist or human rights activist killed, in each student imprisoned or tortured, in each citizen abused by corruption or violence from organized crime.”

But he said the biggest fight of all, however, is “the struggle for the well-being of all, for equality and for the elimination of all forms of discrimination.

“It is also the cruelest, because the reality and the present still hit hard at those who live the anxiety and anguish of poverty and violence,” Almagro said. “For them, 2016 is already late”.

“Friends, let’s work so that that our intentions for 2016 don’t take the place of our ability to work and our continuous effort, inspired by the core values of peace, democracy, human rights, security and development,” he added.