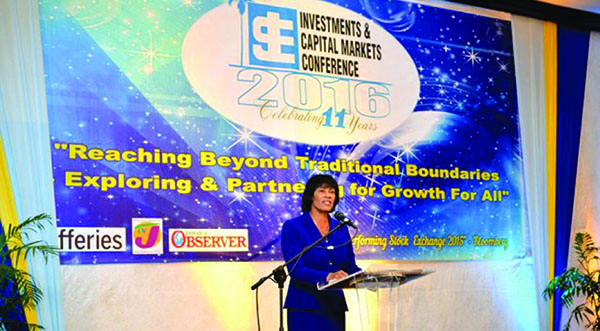 Photo above: Prime Minister, the Most Hon. Portia Simpson Miller, addresses the opening ceremony of the Jamaica Stock Exchange’s (JSE) ‘Investments and the Capital Markets’ Conference at the Jamaica Pegasus Hotel in New Kingston on January 18. The three-day conference is being held under the theme: ‘Reaching Beyond Traditional Boundaries – Exploring and Partnering for Growth for all.’

KINGSTON, Jamaica (CMC) – The Jamaica government says, it is aggressively pursuing investment-led growth, through a number of physical and economic infrastructure development projects.

Prime Minister Portia Simpson Miller told a Regional Investments and Capital Markets Conference 2016 Trade Show, organised by the Jamaica Stock Exchange, on Tuesday, that these strategic investments are geared towards the development of new industries and expansion of existing operations that will drive growth.

Among the projects is the North-South Highway, which is on track for completion by March.

“With this new highway, new opportunities for housing development, trade expansion, real estate and tourism investments will be opened up. I confidently predict that this investment will positively transform the tourism product of Kingston and the north coast of Jamaica,” she said.

Prime Minister Simpson Miller told delegates, that investments in visitor accommodation are growing, pointing out that a number of hotel projects have been completed with several others underway.

She noted that, in 2015, hotels such as Playa (Hyatt Ziva/Zilara), Moon Palace, Marriott and Meliá Braco have started operations here, and that others were in the process of planning refurbishments, expansions or constructing new properties.

She added, that there has been an estimated total investment of approximately J$64 billion (One Jamaica dollar =US$0.008 cents) in the tourism sector since her administration took office in January 2012.

“The Karisma Resort Group is starting construction of its US$900 million mega development at Llandovery in St. Ann during 2016. Another development of two new hotels in Trelawny, Ocean By H-TEN, is expected to start this year, bringing another 1,000 new jobs,” she told the conference.

Prime Minister Simpson Miller said, the government’s encouragement of investments in transshipment port facilities is a deliberate part of the growth agenda, and that the Port of Kingston development remains a high priority to capitalise on opportunities arising from global developments, specifically the Panama Canal expansion.

“In response to opportunities in logistics to make room for additional cargo after the Panama Canal expansion is complete, Kingston Wharves Limited has also embarked on an expansion plan, involving investments of US$50 million.”

She said, that the company’s logistics facility is attracting global brands that seek to leverage the strategic advantage that Jamaica offers as a hub to get their products to market.

“The demand for logistics space in this facility has already outpaced the capacity,” she said, adding, that her government is also pursuing connected opportunities in logistics through the establishment of Special Economic Zones (SEZs).

The zones will facilitate strategic investments that will serve as a catalyst for driving economic growth and facilitate linkages between the global and domestic markets.

Phase one of new manufacturing activities in the Spanish Town Special Economic Zone is expected to be up and running later this year.

“The measures implemented to date have yielded successes, as evidenced by successive upward movements in the ease of doing business index, published in the World Bank Doing Business Report for 2015 and 2016.”

The Conference was held under the theme: ‘Reaching Beyond Traditional Boundaries – Exploring and Partnering for Growth for all’.