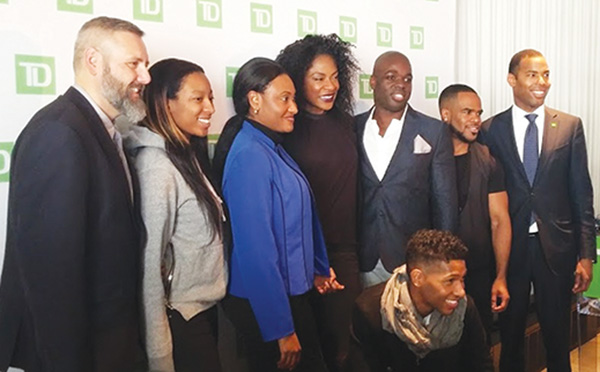 TORONTO, Ontario — An initiative to celebrate the Arts and to engage artists is one of the new enterprising events that TD Bank is sponsoring in its 2016 Black History Month series.

Shawn Cuffie, creative director of Art Xperiential Projects, a non-profit organization, announced the inaugural Black Diamond Ball to celebrate the art, music and fashion of Africa and the Caribbean at a press conference held on the 54th floor of the TD Tower in Toronto on January 14.

Some of the other events during February are a panel discussion about black women in film, the Toronto Black Film Festival, the African American a cappella group, Sweet Honey In The Rock and a play, Venus’ Daughter, presented by Obsidian Theatre Company, among others.

There will also be the launch of Historica Canada’s new Viola Desmond Heritage Minute in Toronto and Halifax in February.

Canadian civil rights icon and businesswoman, Viola Desmond, courageously fought racial segregation in Nova Scotia in the 1940s after she was arrested while sitting in a movie theatre section reserved for white patrons.

Though her legal challenge was unsuccessful, the case became a catalyst for change. She was posthumously pardoned in 2010 by Nova Scotia Lieutenant-Governor Mayann Francis. 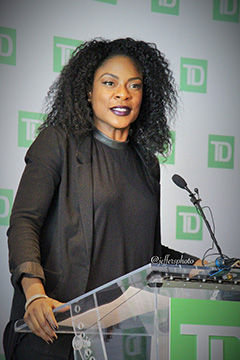 At last Thursday’s launch, hosted by R&B/Soul singer, Jully Black, and attended by  Canadian Idol runner-up, Gary Beals, and many other artists, Alan Convery of Community Relations, TD Bank Group, said the events are about recognizing the contribution of Black Canadians in building Canada and will be artistic cultural showcases of Black History.

Black said the bank has played an important role in celebrating Black ancestry and legacy.

Presented by the bank since 2008, the annual series features an exciting line-up of Canadian and international talent and brand new events to encourage and inspire Black Canadian youth, entrepreneurs and artists.

The Black Diamond Ball will be held on February 26 at the Design Exchange in the heart of the city and will feature Grammy and Oscar nominated Andra Day, Jully Black, Maestro Fresh Wes, Ray Robinson, Gary Beals, Carlos Morgan, and many Canadian artists.

A Black Expo and Celebration will be held earlier in the day to engage students from schools in the Greater Toronto Area.

There will be workshops with artists like Brampton’s WondaGurl who has made beats for Jay-Z and Jordan Jman Francis, actor on the Disney Channel star of Disney Channel’s “Camp Rock” and Family’s “Connor Undercover.”

“It is to have an artists network. What I’ve done in Art Xperiential is I’ve gathered a bunch of artists who are likely or not likely to work together, likely or not likely to be in certain venues. I’ve created the space where they can all come together and its something that’s going to benefit the youth and just the general black community alike.

He said he got a good feedback from artists when he approached them about the initiative and they readily came onboard.

The creative director will be producing the event in three of the six cities – Toronto, Ottawa and Montreal — where events will be held across the country. The other cities are Halifax, Calgary and Vancouver.

Cuffie, a dancer and choreographer, said that when he was growing up in Toronto he did not have an outlet to perform in big venues. He did not know how to break into the scene but sort of fell into it and kept on doing more shows.

“The more shows I did was the more connections I made,” said Cuffie, all the while thinking of how he could make it easier for more young people to get into the industry.

He said he used to go to shows, like Fashion Cares, an annual fundraiser held in Toronto from 1987 to 2012 to raise awareness of HIV and AIDS, and funds for the AIDS Committee of Toronto. The event raised millions of dollars over those 25 years.

“It was just a massive show with a bunch of performances and celebrities and such and I was oh my goodness I want to do this in the community.”

Cuffie hopes that by doing this he will be able to influence youth and show them that big things can happen if they just dream of it.