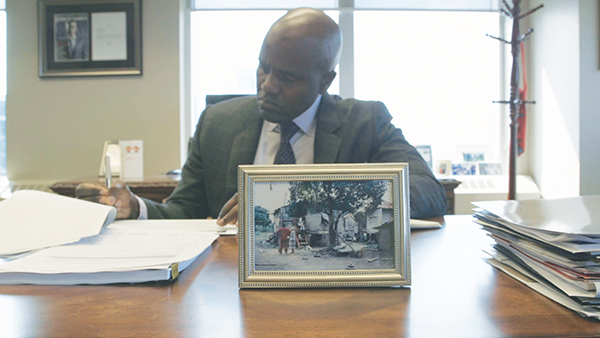 Photo above is of Wes Hall, a prominent business leader, who was recently named one of Canada’s Most Powerful Business People by Canadian Business magazine.

TORONTO, Ontario — The Toronto Black Film Festival (TBFF) will feature over 40 films from 20 countries and among them is a film produced by a first-year Ryerson University student inspired by the story of a successful Black businessman in Toronto.

The festival, which opens on February 10 with Ernest Nkosi’s “Thina Sobabili (The Two of Us),” a South African film at the Isabel Bader Theatre, will close on February 14 with another South African feature, Mark Dornford-May’s “Breathe Umphefumlo” at the Carlton Cinema.

“WES,” a documentary that is the brainchild of 19-year-old Ryerson University media production student, Samuel Lehner, will have its world premiere on February 13 at Jackman Hall, Art Gallery of Ontario.

“This documentary explores the life of Wes Hall, a prominent business leader who was recently named one of Canada’s Most Powerful Business People by Canadian Business magazine. As a child who was raised by his maternal grandmother in a tin shack in rural Jamaica, Wes was challenged with heartbreaking adversity growing up. Moving to Canada at a young age, Wes set himself on a path for a better life. Through his continued drive and determination, Wes has worked to become a tremendous success in both his business and family life,” reads the synopsis of the film.

Hall will be receiving the vice chancellor’s award at the University of the West Indies Toronto Benefit Gala on April 2 at the Ritz-Carlton.

An industry expert in proxy solicitation, depositary, corporate governance and other shareholder related initiatives, Hall has been involved in some of the highest profile deals and proxy contests in North America.

He was raised by his grandmother along with 14 half-brothers and sisters, eventually immigrating to Canada in 1985 at the age of 16.

His generosity has enabled cancer care for children in the Caribbean. In 2014, he made a $1-million donation to the SickKids-Caribbean Initiative, which is working to improve the management of paediatric cancer in six English-speaking Caribbean countries.

Lehner, director, editor and producer of the film, said he came across Hall’s story in the Report on Business in the Globe and Mail published in February 2014.

“As I was reading through it, I knew immediately that it would make for a great documentary and so I was able to get a meeting with Wes and I pitched him the idea. From there that’s kind of how it all started,” said Lehner.

He said his idea caught Hall off-guard a little bit to have a random kid come into his office to pitch him an idea about doing a documentary on his life story.

“I think it was a little bit out of right field but sitting with him and talking to him you could see him kind of warming up to the idea,” said Lehner, who Hall invited to his home to discuss it with his family.

If Hall’s family was okay with the idea, it was a go; if not, Hall would wish him the best on his next project.

Lehner’s childhood friend, Alexander Weiditch, 19, also a student at Ryerson University, was the co-interviewer and production assistant on the project.

He said Lehner pitched the idea about the documentary, “WES,” to him in the middle of a hockey rink while they were shooting a series, “The Hockey House” for Leafs TV.

“It was long process of organizing those interviews and finding the people that would really help bring his story to light cause you can’t just have him telling it. I think the most important thing about that through the interview process was how consistent the respect for Wes was and how consistent his importance to the industry is. Everyone said Wes did something that pretty much no one else could have,” said Weiditch, who described Hall as a very humble person.

He said his friend has done “a really incredible job by having this idea to share this story with everyone because it’s going to resonate with a lot of people.” 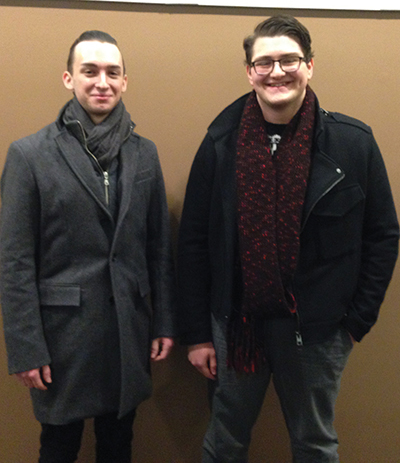 Samuel Lehner, director, editor and producer of the film, WES, left, and Alexander Weiditch, co-interviewer and production assistant at the press conference of the Toronto Black Film Festival at the Carlton Cinema on January 20. WES, a film about the life of Wes Hall, a prominent Jamaican Canadian entrepreneur and philanthropist, will have its world premiere at the festival on February 13 at Jackman Hall, Art Gallery of Ontario. Photo by Neil Armstrong.

Lehner, an aspiring Toronto-based director and the head of S.a.M Productions, a video production and website design business he began when he was only 14 years old, said it took about six months to produce the film, from conception to a having a semi-final product.

The idea started around November/December 2014 and in 2015 work started on getting the film made.

In February or March of last year, he travelled to Golden Grove in St. Thomas, Jamaica with Hall and met some significant people in the businessman’s life. They shared their stories of what Hall was like as a child and their thoughts on where he is now.

“Traveling to Jamaica and meeting Wes’ family members was an incredible experience. I was fascinated with the outlook on life and the love that Wes’ family have for each other, despite having far fewer material possessions than most people in Canada. Speaking with Wes’ friends and business partners also showed me the extent to which Wes has had such a positive impact on others,” writes Lehner in the director’s statement.

The opening shot in the film shows the tin shack where Hall was raised by his grandmother. A photo of this sits in a place of pride in Hall’s office in the financial district.

As someone who was always interested in the media production industry, Lehner thought a feature film would be the best tool to tell Hall’s story.

After high school, Lehner had a gap which allowed him some time to concentrate on working on a project of this scale.

The 82-minute film includes perspectives from family, friends and business partners who have influenced Hall in his journey to success.

“The film actually doesn’t have any funding from outside forces. This was something I put my savings into,” said Lehner, noting that it is a truly independent film.

“It was solely just kind of me and a few friends going out with the camera and kind of putting this together, so definitely a small budget. But I think with that budget we were able to put together something nicely,” he said.

Founded by the Fabienne Colas Foundation, TBFF is dedicated to celebrating the very best in cinematic work dealing with the experiences of black people from a diversity of communities.

Its mandate is to provide an opportunity for filmmakers from all ethnic backgrounds to shine the spotlight on authentic stories that reflect the realities of black experiences.

Presented by Global News in collaboration with TD Bank, and coinciding with Black History Month, organizers say the festival “is celebrating diversity within the black communities through powerful films, exciting panels and special events.”

It will also feature Stanley Nelson’s “The Black Panthers: Vanguard of the Revolution,” a feature-length documentary that explores the Black Panther Party and its fiftieth anniversary.

There will be workshops, master classes and movie-talks at the Carlton Cinema.

On February 13, Trey Anthony will host a movie-talk “She saw herself, beautiful, brown and black” and the following day there will be “Up & Close with Clement Virgo” and a screening of one episode of “The Book of Negroes.”

“TBFF showcases the most outstanding and amazing black films while creating a space to debate major cultural, social and socio-economic issues,” said Fabienne Colas, president and founder of the festival.

On the closing day of the festival, the TBFF Community Program will include a panel discussion on Black realities in today’s society at the Carlton Cinema that will be aired on G98.7FM.