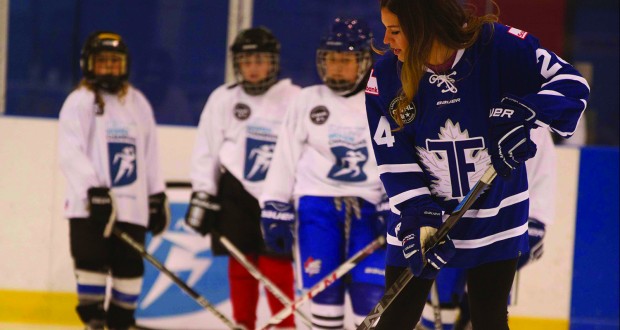 (NC) It can be difficult for many elite athletes to find sufficient funding to allow them to train full-time. That said, it is arguably most difficult for women in Canada. This inequality is exemplified through the professionally-run Canadian Women’s Hockey League (CWHL). Featuring some of the world’s best players, the CWHL plays an essential role in developing and shining a light on female hockey players – yet all of these athletes go unpaid.

While many female athletes receive a stipend from the government for being top-ranked amateurs, it’s simply not enough to live on. As a result, it is normal for all female athletes to carry part-time or full-time jobs, on top of their extensive training and game schedules. However, major strides are being made, as the CWHL has plans to begin paying players in the 2017/18 season.

“I feel fortunate to have had the opportunity to play and develop my skills with the CWHL,” says Natalie Spooner, forward, Toronto Furies. “With the support of my coaches and the continued heightened competitive stakes of the league, I am continually challenged to be a better player and teammate.”

As champions of healthy living and playing an active role in their communities, Canada’s dairy farmers are addressing these inequalities through an initiative named Fuelling Women Champions(FWC). FWC is dedicated to advancing women in sport and helping to see that no hurdle exists that might hinder passion for sports. Through the initiative, Canada’s dairy farmers have partnered with CWHL and champion hockey player, Natalie Spooner, among other notable organizations and female athletes. To build exposure and fandom for female sports, FWC hosts multiple grassroots events across Canada.

More information is available at www.womenchampions.ca. Follow and join the movement online to #ChampionHer.