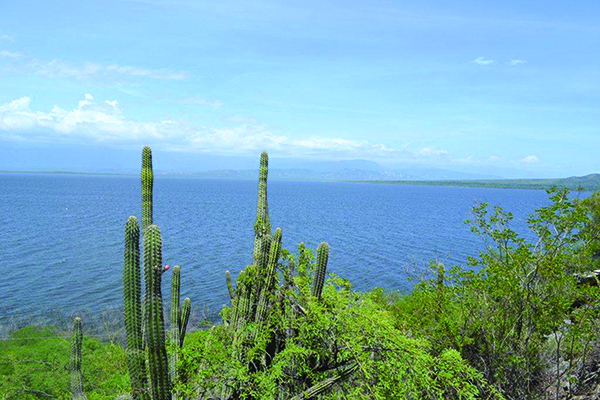 Photo above is of a view of the Caribbean Sea in the Dominican Republic near the border with Haiti on the island of Hispaniola, which the two countries share. The roughly 7,000 Caribbean islands are home to thousands of endemic species, whose preservation is complicated by climate change. Photo credit: Dionny Matos/IPS.

SANTO DOMINGO, Dominican Republic (IPS) — The nearly 7,000 islands and the warm waters of the Caribbean Sea are home to thousands of endemic species and are on the migration route of many kinds of birds. Preserving this abundant fauna requires multilateral actions in today’s era of global warming.

That is the goal of the Caribbean Biological Corridor (CBC), a project implemented by the governments of Cuba, Haiti and the Dominican Republic, which was created in 2007 with the support of the United Nations Environment Programme (UNEP) and the European Union with the aim of protecting biodiversity in the region.

“Puerto Rico should form part of the corridor in 2016,” Cuban biologist Freddy Rodríguez, who is taking part in the initiative, told IPS.

In late 2015 Puerto Rico, a free associated state of the United States, presented an official letter asking to join the sustainable conservation project, whose executive secretariat is located in the Dominican Republic on the border with Haiti.

“The admission of new partners, which has been encouraged from the start, is a question of time,” said Rodríguez. “Several countries have taken part as observers since the beginning.” 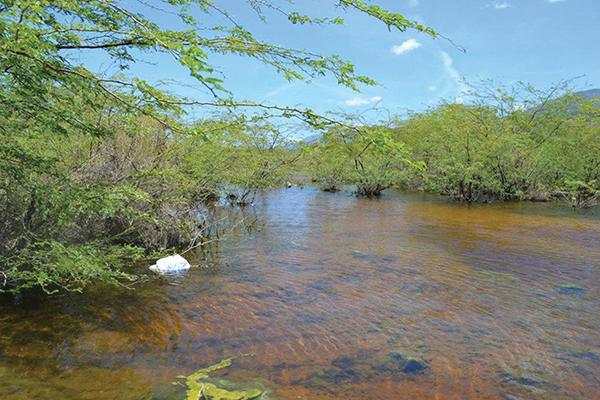 Lake Azuei on the border between the Dominican Republic and Haiti is one of the ecosystems preserved by the Caribbean Biological Corridor. Photo credit: Dionny Matos/IPS.

He said the Bahamas, Dominica, Jamaica and Martinique are observer countries that have expressed an interest in joining the corridor.

The Caribbean region is already prone to high temperatures, because the wind and ocean currents turn the area into a kind of cauldron that concentrates heat year-round, according to scientific sources.

And the situation will only get worse due to the temperature rise predicted as a result of climate change, a phenomenon caused by human activity which has triggered extreme weather events and other changes.

The extraordinary biodiversity of the Caribbean is increasingly at risk from this global phenomenon, which has modified growing and blooming seasons, migration patterns, and even species distribution.

Meanwhile, the biological corridor is one demonstration of the growing efforts of small Caribbean island nations to preserve their unique natural heritage.

It also reflects the long road still ahead to regional integration in the area of conservation. 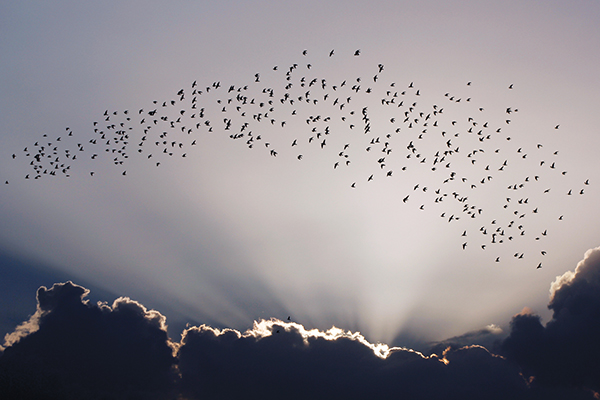 A flock of birds flies over a coastal neighbourhood of Havana, Cuba. The Caribbean Biological Corridor is on the migration route for many species of birds, and its conservation requires multilateral actions in today’s era of global warming. Photo credit: Jorge Luis Baños/IPS.

Studies carried out by researchers involved in the biological corridor have documented damage caused to nature by extreme events like Hurricane Sandy, which hit eastern Cuba in 2012, and the severe drought of 2015, which affected the entire Caribbean region.

Rodríguez said they have carried out more than 60 training sessions, involving local communities as well as government officials from the three countries, with the participation of guests from other Caribbean nations.

And they have a web site, which compiles the results of studies, bulletins, a database and maps of the biological corridor.

“Other people and institutions say the CBC’s biggest contribution has been to create a platform for collaboration with regard to the environment, which did not exist previously in the insular Caribbean. This has created the possibility for the environment ministers to meet every year to review the progress made as well as pending issues,” Rodríguez said.

“We are trying to grow in terms of South-South collaboration,” he said.

The insular Caribbean is a multicultural, multi-racial region where people speak Spanish, English, Dutch, French and creoles. It is made up of 13 independent island nations and 19 French, Dutch, British and U.S. overseas territories.

These differences, along with the heavy burden of under-development, are hurdles to the conservation of the natural areas in the Caribbean, which is one of the world’s greatest centres of unique biodiversity, due to the high number of endemic species.

Experts report that for every 100 square kilometres, there are 23.5 plants that can only be found in the Antilles, an archipelago bordered by the Caribbean Sea to the south and west, the Gulf of Mexico to the northwest, and the Atlantic Ocean to the north and east.

The project is focusing on an area of 234,124 square km of greatest biodiversity, home to a number of unique reptile, bird and amphibian species.

The four million square km of ocean around the Antilles are “the heart of Atlantic marine diversity,” according to a report by the Critical Ecosystem Partnership Fund. 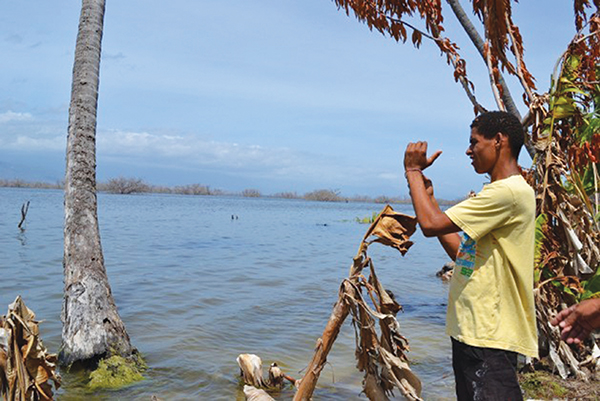 A young man on the banks of lake Enriquillo on the border between the Dominican Republic and Haiti, which forms part of the Caribbean Biological Corridor created in 2007 by these two countries and Cuba with the support of the United Nations Environment Programme (UNEP) and the European Union. Photo credit: Dionny Matos/IPS.

“As a Dominican, I didn’t have that much experience and I hadn’t heard about the Caribbean environment,” business administration student Manuel Antonio Feliz, who has taken CBC courses, told IPS. “The trainings have opened my eyes to the natural riches of our islands.”

“We talk more about the polar bear and the loss of its habitat at the North Pole than about a little local frog or solenodon (one of the rarest mammals on earth, native to the Antilles),” Cuban researcher Nicasio Viña said in a conference for a group of journalists in the capital of the Dominican Republic, which IPS took part in. “The people of the Caribbean, we don’t know what treasures we have in our hands.”

Viña, director of the CBC executive secretariat, explained that initiatives like the biological corridor require at least 30 years of work to solidify.

He called for “thinking about conservation systems, due to the extraordinary influence and responsibility that we human beings have with regard to biodiversity in the Caribbean, because of what we have done, and climate change.”

The corridor has a centre of plant propagation in each one of the member countries, where seedlings of native species are grown to reforest the areas that are benefiting from pilot projects.

The pilot projects are aimed at helping Dominican, Haitian and Cuban communities to find environmentally-friendly sources of income, besides restoring degraded environments.

So far they are being implemented in the Cuban settlements of Sigua in Santiago de Cuba and the Baitiquirí Ecological Reserve in Guantánamo; the communities of Pedro Santana, Paraje Los Rinconcitos and Guayabo, in the Dominican province of Elías Piña; and in the Haitian towns of Dosmond and La Gonave.