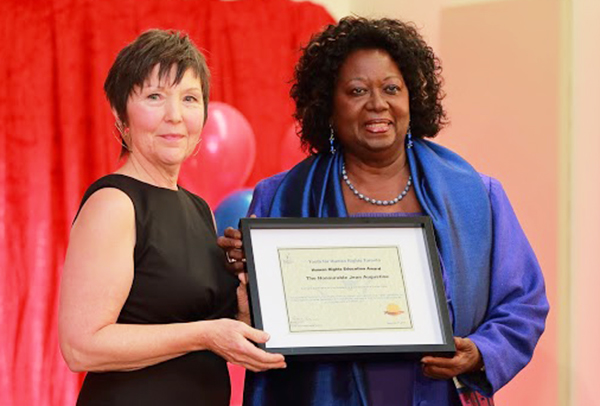 YHRI is a non-profit organization founded in 2001 by Dr. Mary Shuttleworth, an educator, born and raised in apartheid South Africa, where she witnessed firsthand the devastating effects of discrimination and the lack of basic human rights.

A lifelong educator, Grenada-born Dr. Augustine, the first African-Canadian woman elected to the Canadian House of Commons and the first Black federal Minister, received her tribute for her “significant dedication towards bringing life to human rights”.

Dr. Augustine, a former elementary school principal, was especially recognised for her “work in the promotion of the 30 human rights contained in the historic document of the Universal Declaration, written nearly 70 years ago and containing fundamental rights to which all human beings are entitled.

She migrated to Canada in 1960 as a domestic, attended the University of Toronto, where she earned bachelor of arts and master of education degrees and, from 1988 until 1993, was Chair of the Metro Toronto Housing Authority.

The former national President of the Congress of Black Women of Canada, makes a better future for young women, every year, through the Jean Augustine Scholarship, a fund that helps single mothers attend George Brown College and Centennial College in Toronto.

She has shared her expertise and enthusiasm with others as a member of several community boards, including those of York University, the Hospital for Sick Children, the Stephen Lewis Foundation and Harbourfront Corporation.

Dr. Augustine donated her archival and parliamentary materials to York University’s Faculty of Education, thus creating the opportunity to establish an innovative academic position, the Jean Augustine Chair in Education in the New Urban Environment. 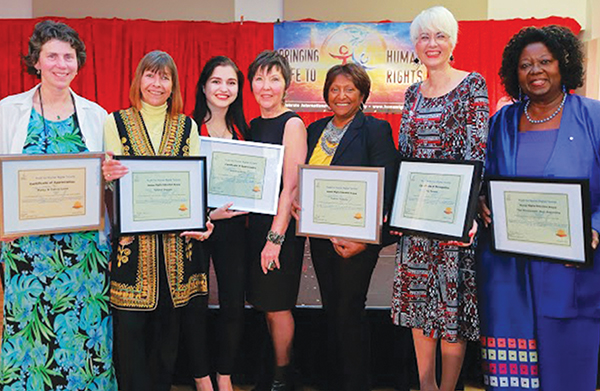 She has been honoured by many organizations for her leadership and community involvement. In 2009 the Women’s Executive Network named her as one of Canada’s Most Powerful Women: Top 100 Awards winners. The Girls’ Leadership Academy of the Toronto District School Board bears her name.

She was awarded the Luminary Award by the University of the West Indies in 2006, and has received honorary doctor of laws degrees from the Universities of Toronto, Guelph, McGill and York.

In December 2009 she was appointed as a Member of the Order of Canada and in 2012 received the Queen’s Diamond Jubilee Medal.

These award recipients were: Ms. Padmini Padiachy, Vice-Principal with the York Region District School Board; Tylaine Duggan, Founder of Youth Day Global; Pat Felske, Director of Public Affairs for the Church of Scientology; and Kristina Kisin, who received the Youth Achievement Award.

Themed “Bringing Life to Human Rights”, the event was held at the Ontario Science Centre, and was attended by an audience of 200 people.

Live entertainment was provided by a variety of dynamic performers, including a contemporary dance piece by Perspective Dance; songs by Max Webb; and an instrumental piece, presented by Cedarwood Public School students under the guidance of their music teacher, Jeff Gunn — a Juno-nominated guitarist, songwriter and producer who did an opening act for the Rolling Stones and served as musical director for many other renowned singers.

During her verbal presentation, Ms. Nicole Crellin, the YHRI Toronto Director, stated, “This celebration is being held to bring attention to the United Nations Declaration of Human Rights, so that others will be inspired to make human rights a global reality and not something vague and impossible.”

She added, “There is a grave worldwide situation with too many human rights violations occurring such as human trafficking, poverty, man-made famine, slavery and illiteracy with more than a billion adults unable to read.

“We need to petition governments to implement and enforce the provisions of the 1948 UN’s UDHR and mandate human rights education in schools.”

With a purpose “to teach youth about human rights and inspire them to become advocates for tolerance and peace”, YHRI has delivered human rights education in over 150 countries and is working with over 1,000 organizations and governments worldwide.

The organisation uses in-classroom and non-traditional educational settings to reach people from diverse backgrounds, with materials which often appeal across generations. By teaching human rights through all means—from conferences and workshops to hip-hop and dancing—YHRI’s message has spread globally.

More information about YHRI can be gotten from the organisation’s website at www.youthforhumanrights.org.