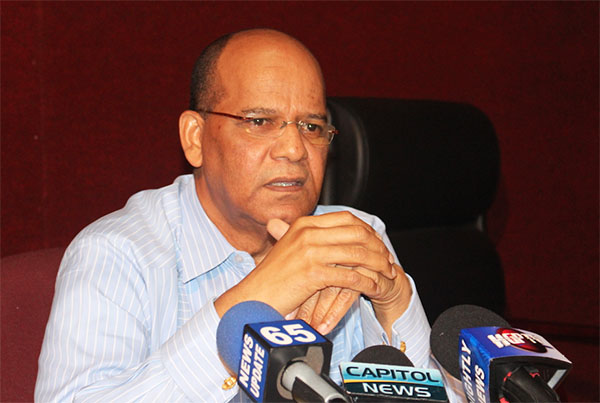 GEORGETOWN, Guyana CMC – The main opposition People’s Progressive Party (PPP) yesterday, called on the Guyana government to put in writing, its policy regarding the operations of the state-owned Government Information News Agency (GINA).

PPP General Secretary, Clement Rohee, said, that the policy, as outlined by President David Granger on television over the last weekend, now needed to be put in an official statement and circulated as part of the government’s new policy on information.

“I believe that GINA must write to everybody…conveying to them the policies…how much airtime they are allotted, and things like that,” Rohee told reporters.

Granger, responding to a statement made, last week, by the Director of Public Information, Imran Khan, that GINA’s role is not to cover the Opposition in Parliament, said, “the people need to know and that is my policy.

“I’ve announced that policy while I was in opposition and I maintain that policy now that I’m in government,” Granger said on the weekly “Public Interest” television program, last Friday night.

President Granger dismissed the position of Khan, saying also, the people of Guyana “have to be better informed and you cannot inform the people by depriving them of information”.

Khan’s statement on the social network, Facebook, came, after GINA and the Department of Public Information were criticised for only carrying reports and information about the government legislators during the budget debate.

Rohee told reporters, he was taking Granger’s speck “with a pinch of salt,” adding that there must be some clarity coming from the Office of the Department of Public Information (DPI) within the Office of the Prime Minister.

“That statement ought to be balanced against what Imran Khan stated and what (Prime Minister Moses) Nagamootoo is saying,” he added.