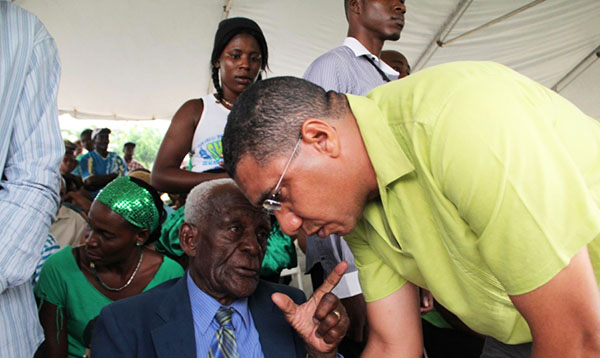 Photo above shows JLP Leader, Andrew Holness, bending and listening to a senior at an event on Labour Day, in 2014. Photo credit: JLP.

Both JLP Leader, Andrew Holness, and former Finance Minister, Audley Shaw, told supporters at a rally here, that the controversial policy that would allow for employees, earning up to J$1.5 million (One Jamaica dollar =US$0.008 cents) annually, not to pay taxes, would not be a burden on the local economy.

“After four years of taxation, it is time to make you a part of the partnership of prosperity,” Holness told the rally.

“Our plan is based on solid economics; when your economy is contracting, that is the time government must act to give a stimulus to the economy,” he said to loud cheers, adding, that the country should no longer fall “for the trickery” of the PNP, the ruling People’s National Party.

Holness said, that as far back as 2011, when he was campaigning to ensure the JLP remained in office, he had warned the country that “there is going to be some rough times while we implement tax reform, (and) after that, the country will grow…but some people ran for the trickery of the PNP.

“Well you now have a chance to make it right again, now you have a chance to repair that damage,” he said, adding, that when the PNP won the 2011 poll, it found an agreement with the International Monetary Fund (IMF) just six months waiting to be completed.

He said, the Portia Simpson Miller administration could have decided to continue with the existing program rather than negotiate a new one, that resulted in a total of J$52 billion in taxes on the population over the last four years.

He said further, the local currency had been devalued significantly, with exports on the decline.

“As a consequence, your food basket is half of what it was in 2011,” he said, adding, the 10-point plan the JLP has for Jamaica, over the next five years, have transferred Jamaican politics.

“We have presented Jamaica with the path to prosperity,” Holness said, telling the supporters “on February 25, go out in your numbers…and show PNP they can’t take your vote for granted. 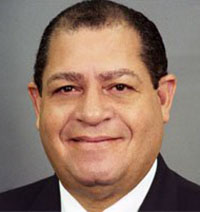 Earlier, Shaw, who had once challenged Holness for leadership of the party, said that under the PNP, the Jamaican dollar had devalued by at least J$100, and that the time was now for a change of economic policies in the country.

He said the tax break for workers, such as teachers, police officers, nurses and firemen, was designed to stimulate the economy.

“We are ensuring that Jamaica comes out of the situation, where we have the most inequality situation in the world, “Shaw said, adding that the JLP wanted all low-income workers to have “a better way of life”.

“We are mindful that those (earning) between 1.5 to five million will have to pay taxes, but the threshold will remain at J$600,000…but as soon we get into office we will review that. Our long term plan is to move away from income tax.

The PNP and some political and financial analysts here, have said that the income tax proposal is not feasible, with the former President of the Private Sector Organisation of Jamaica (PSO), Joseph Matalon, in a full page article in the Sunday Gleaner indicating that the tax proposal was “unworkable” .

Matalon said, that under the JLP plan, someone earning up to J$1.8 million could take home less than a person earning J$1.5 million.

He said, this could then cause people negotiating lower salaries in order to increase their take home pay and that it would cost more than J$31 billion to the treasury.

“It’s a revenue loss,” said Matalon, who added, that it is simply unaffordable in the context of the current economic reform program, endorsed by the IMF.

But Both Holness and Shaw dismissed the analysis with the JLP Leader saying, “this election, more than any other election, has seen people talking about issues…

“But at the end of the day, channel that into a vote for the JLP…who want to see better for you and the country.”

Also addressing the rally on Sunday night, was former JLP Leader and former Prime Minister, Edward Seaga, who said, after resigning following 45 years in active politics, he had not envisioned putting on “my green shirt again”.

“I never thought I would see the day when I would come out in my green shirt again. When I retired in 2005, I took off the shirt and the shoes that I was wearing from the 70s,” he said, telling the crowd, “I am not here to tell you that I want to resume my political career, 45 five years of unbroken service is enough”.

But he said, he wanted the next government to ensure that no one will have to take to the streets to cry for justice.

“The only way you can get such a government is to have free and fair elections, for which the JLP struggled in the 1990s,” said Seaga, warning, that of the 63 constituencies across the island, there are only seven machines to allow for electronic voter identification.

“This means that only seven of the 63 constituencies are protected,” he said.