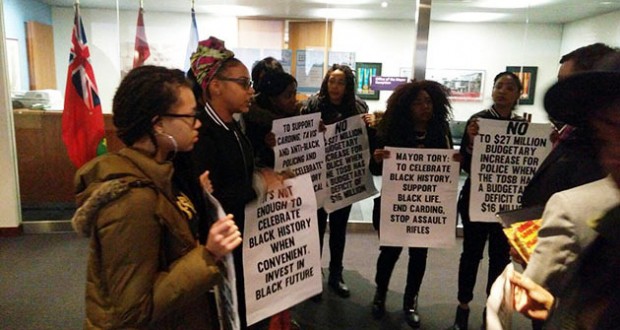 Gwyneth Chapman, Special Advisor, Youth Engagement and Development, in the Office of the Mayor, who organised the celebration, invited Greater Toronto Area (GTA) school Boards to send a maximum of 60 students per school to the event, “in celebration and recognition of the achievements and contributions of African-Canadians”. 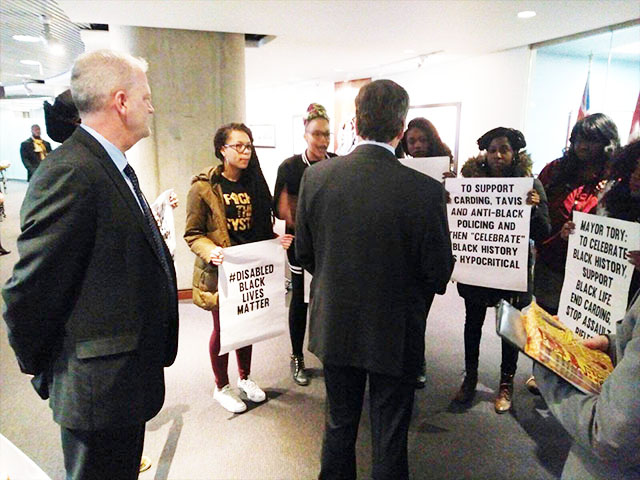 City Hall’s first annual BHM celebration, which was held in Chambers, was aimed at school students, with the intention of exposing them to positive, inspiring messages from former and present leaders, professional icons and trailblazers from within, and outside of, the African-Canadian community. 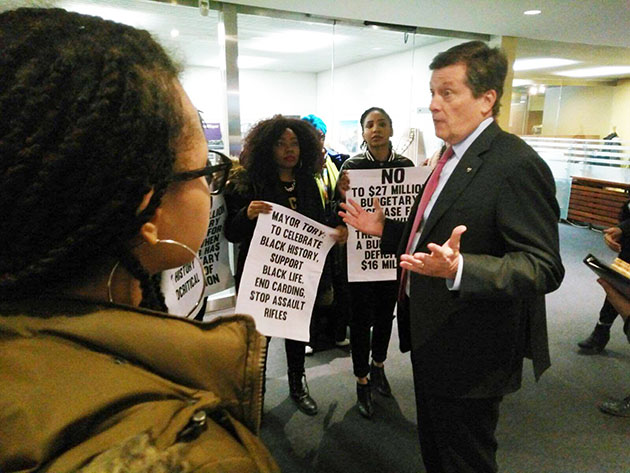 The uninvited Black Lives Matter-Toronto protesters, who were not allowed into the Chambers, held signs calling for answers into the death of Andrew Loku, a Black man, who was killed by Toronto Police in the summer of 2015.

They also highlighted issues with education, comparing the budgetary increase for policing to the budgetary deficit for the Toronto District School Board.

According to the group’s media release, “The message was clear: to simply celebrate the contributions of Black people, while ignoring the injustices facing Black Torontonians amounts to hypocrisy — don’t just celebrate our history, support our future.”

“I’m tired of largely white politicians using Black History Month as a way to pat themselves on the back,” said Pascale Diverlus, co-founder of Black Lives Matter–Toronto.

“How dare you ignore scores of community (members) telling you to end the anti-Black practice of carding, and then claim to support us through a toothless, one-hour ceremony? It’s offensive.”

Black Lives Matter–Toronto describes itself as “the Toronto chapter of #BlackLivesMatter, an international organization and movement fighting police and State violence and anti-black racism”.

“The anti-Blackness in the school system is obvious. Push-out rates, streaming, and lack of support for schools in communities with high populations of Black students are a reality,” said Alexandria Williams, co-founder of Black Lives Matter – Toronto.

“Where is the Mayor’s work on these issues? We don’t need the Mayor to pat himself on the back. We need action.” 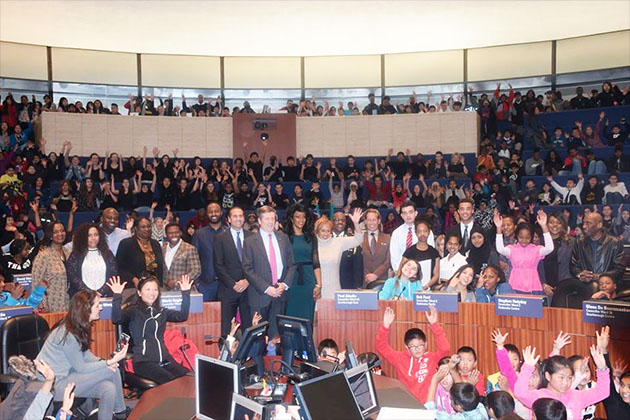 The four-hour BHM celebration, which was very well attended, included a tour of City Hall for the students, who were given the opportunity to sit in the chairs of the city councillors, and the mayor’s, an exercise aimed at “giving them a sense of what it feels like to be a City councillor for the day”.

They were also treated to entertainment by student artistic performers; interacted with the mayor in an informal question and answer session and, afterwards, were fed lunch and photographed with the leaders and speakers who were present.

Hon. Mitzie Hunter, MPP for Scarborough—Guildwood and Associate Minister of Finance with responsibility for the Ontario Retirement Pension Plan, was a special guest and, although she had to rush off to urgent parliamentary business, took the time to personally greet many of the students.