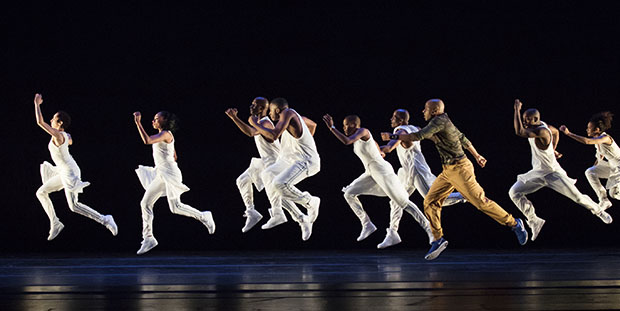 The photo above is of the Alvin Ailey production, Exodus. Photo by Paul Kolnik.

TORONTO, Ontario — Beloved as one of the world’s most popular dance companies, the Alvin Ailey American Dance Theater will perform in Toronto for three performances, only, on March 4 and 5 at the Sony Centre for the Performing Arts.

Alvin Ailey’s pioneering legacy of uplifting, uniting, and celebrating the human spirit lives on, as the company’s extraordinary dancers bring a wide array of premieres, new productions and classics to life. 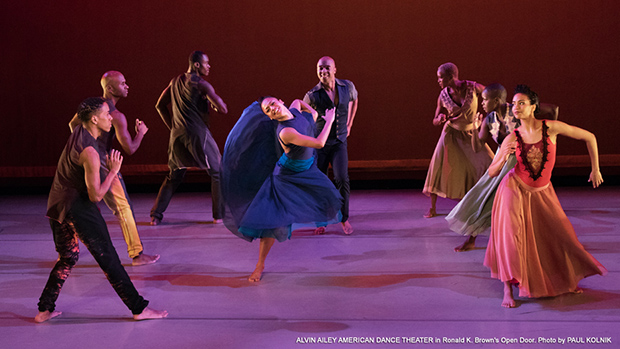 Program A, to be performed on Friday, March 4 at 8pm and Saturday, March 5 at 8pm, will spotlight:

Toccata (1964/New Production 2015) – A vibrant episode from 1960s Come and Get the Beauty of it Hot, created by Talley Beatty. The ballet is set in the streets of New York and incorporates nuances of classic and jazz to the music of Grammy Award-Winning Argentine composer Lalo Schiffrin.

Love Songs (1972/New Production 2015) – Choreographed by Alvin Ailey for the legendary Dudley Williams, this three-part technical and dramatic tour-de-force displays both the power and gentleness of the male soloist, featuring the music of Donny Hathaway and Nina Simone.

Exodus (2015/Canadian Premiere) – Acclaimed hip-hop choreographer Rennie Harris creates a highly-anticipated performance set to gospel and house music along with spoken word that explores the idea of “exodus” – from one’s ignorance and conformity – as a necessary step toward enlightenment.

Open Door (2015/Canadian Premiere) – Inspired by Choreographer Ronald K. Brown’s travels to Cuba, the vibrant and joyous performance reveals how music can act as a guide in opening pathways to culture, movement and dance.

And Program B, to be performed on Saturday, March 5 at 2pm, will feature four productions:

Four Corners (2015/Canadian Premiere) – Renowned for his signature blend of modern dance and West African idioms, Ronald K. Brown envisions four angels standing on the four corners of the earth holding the four winds in this powerful and hope-filled journey of tribulation, devotion and triumph.

Awakening (2015/Canadian Premiere) – Robert Battle’s first world premiere as Artistic Director uses his taut, ritualistic style to powerful effect in a personal tale of hope featuring over a dozen dancers on a cathartic journey that expertly balances chaos and resolution, dissonance and harmony.

A Case of You (1984/New Production 2015) – “A steamy, emotionally intense duet” (The New York Times) choreographed by Judith Jamison and performed to Diana Krall’s version of the Joni Mitchell classic song A Case of You. 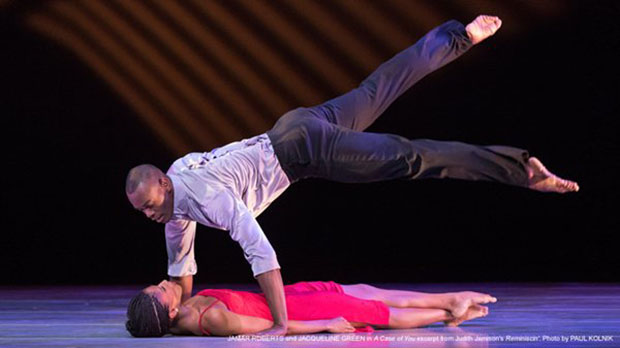 Jamar Roberts and Jacqueline Green in “A Case of You”. Photo by Paul Kolnik.

Revelations (1960) – For more than 50 years, Alvin Ailey’s signature masterpiece has consistently enraptured audiences all over the world with the perfect blend of reverent grace and spiritual elation that pays homage to and reflects the cultural heritage of the AfricanAmerican.

Sony Centre for the Performing Arts, Toronto’s first Performing Arts Centre, has played a defining role in the cultural life of Toronto for more than 50 years.

Today, the Centre is home to a roster of national and international artists that reflect the diversity and sophistication of 21st century Toronto. In addition, it is dedicated to developing Toronto’s younger audiences through family programming, workshops targeted towards school-aged audiences, an under-30 membership program, and other community initiatives.

The Alvin Ailey American Dance Theater will perform at the Sony Centre for the Performing Arts, located at 1 Front Street, East, on Friday, March 4 at 8pm (Program A) Saturday, March 5at 2pm; and (Program B) on Saturday, March 5 at 8pm.