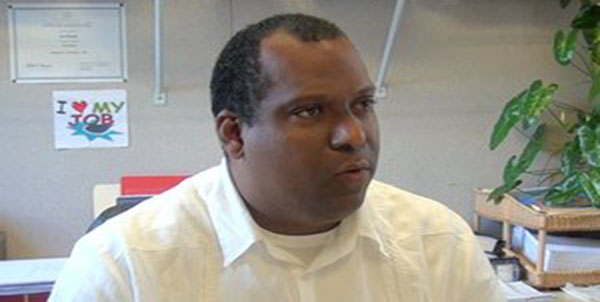 ROSEAU, Dominica, Mar 2, (CMC) – Public Works and Ports Minister, Ian Pinard, today, tendered his resignation to Prime Minister, Roosevelt Skerrit, amid allegations that “serious inappropriate behaviour” have been made against him.

In a statement to the media, Pinard said, that the allegations were made “against me in the media and elsewhere, in relation to matters, which the public rightly is, and has been, most concerned about.

“I believe I have a moral and fiduciary responsibility to you, to address you on this matter,” Pinard said, in his brief statement.

Last night, Prime Minister Skerrit told the nation, he would “act decisively” on any issue requiring his action, following a briefing from the acting prime minister.

“I am aware of widespread concerns among the population, concerning alleged inappropriate behaviour of three adults in positions of trust and influence in our society.

“I wish to state, at this point and on this stage tonight, that I have only just returned to Dominica, and am looking forward, as early as tonight, to full briefing from the Acting Prime Minister and all relevant office holders with whom I would normally confer after a long period of absence from the country,” he told supporters upon his arrival at the Canefield Airport, just on the outskirts of the capital.

Police later confirmed that they were carrying out investigations into the matter, in an effort “to quell public anxiety” and “protect the interest of innocent citizens”.

The police said, they were urging the public, particularly Dominicans here and abroad as well as the media, to cooperate with law enforcement officers by allowing these investigators to carry out their duties.

“The administration of justice is hindered when rampant speculation and false words are used to contaminate the investigative process,” the police said.

There have been widespread allegations, here, of inappropriate behaviour, involving some high-ranking members of society and a minor, and the main opposition United Workers Party (UWP) issued a statement condemning sexual assault and abuse of children here.

“The United Workers Party condemns the continuing sexual atrocities and brutal assaults on the children of Dominica, and urges the law enforcement authorities to ensure that all reports of abuse of our minors, in particular, are prosecuted to the full extent of the law,” the UWP said, in the statement, signed by its leader, Lennox Linton.

“We believe that regardless of political affiliation, social standing or religious persuasion, the individuals involved in this crime must be brought to justice as an example of what should only be a national policy of zero tolerance in defense of our children,” Linton said, adding, that “as responsible adults, especially in national leadership, we have a sacred responsibility to nurture our youth; to raise them up; to guide them; and to keep them safe under the unwavering protection of the rule of law”.

In his statement, Pinard said, “in light of these allegations, I consider that my continued presence in the Cabinet can adversely impact the very important work this government is doing, and must continue to do, for the people of Dominica.

“In order to allow me to more appropriately address the allegations against me, and also in order to focus on other very important personal matters, I have, earlier today, tendered to the Honorable Prime Minister, my resignation as a minister of government, with immediate effect,” Pinard said, adding however, that he would continue to serve as a Member of Parliament for Soufriere Constituency, “pending what I am confident will be a successful conclusion of this matter”.

He expressed his “profound thanks” to Prime Minister Skerrit, for giving him the opportunity to serve the country at the highest level.

“I also wish to thank the constituents of the Soufriere Constituency for the support and confidence they have reposed in me. I assure you of my continued readiness to serve you,” Pinard said.