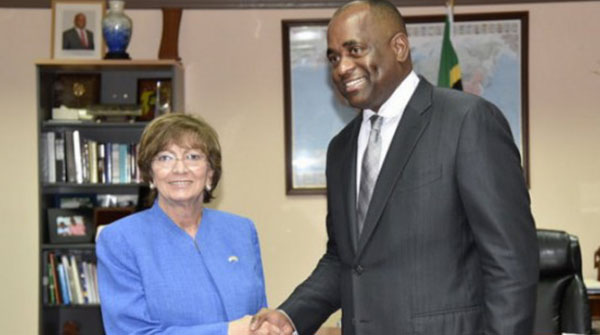 ROSEAU, Dominica, Mar. 4, (CMC) – Newly appointed United States Ambassador to Dominica, Linda Taglialatla, was welcomed to the island by Prime Minister, Roosevelt Skerrit, when she visited, yesterday, in her new capacity as Chief of the U.S. Mission to Barbados, the Eastern Caribbean and the OECS.

During a welcome ceremony held in her honor, the Prime Minister said, the US has been instrumental in the provision of material support, and the biggest sponsor of training programs with the police.

“That is very useful in equipping the police officers in fighting the increasingly challenging issue of drug trafficking. We look forward to the continued cooperation,” he added.

Taglialatela said, her predecessor had a very good relationship with the Government of Dominica, and she hopes to follow in his footsteps.

“I would certainly like to build on the relationship that we have, and to strengthen it,” she noted.

According to the new ambassador, Dominica is an esteemed partner, which the US provided support to in 2015.

She added, that the US provided over US$3 million to security assistance, as well as funding programs that empower youths and increase resilience to climate change impact.

In making his comments, President of Dominica, Charles Savarin, said, the US is committed to maintaining and strengthening its friendship with Dominica.

“The United States is committed to maintaining and strengthening the bonds of friendship and cooperation, which already exists between the two countries…,” he said adding, that “focus will be placed on continuing the robust partnership that makes the relationship between United States and Dominica special.”