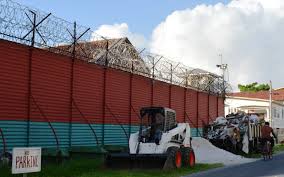 The police report, that they found the bodies of at least 13 prisoners, following a fire at a section of the institution.

Senior security officials also believe that other bodies will be discovered, with one stating, that the death toll could be as high as 20.

Shortly after 11am (local time) today, the fire service was called to the prison, which is located in central Georgetown, following reports that prisoners had set fire to a section of the capital offences section of the prison, to protest against a raid by prison authorities on Wednesday.

The Prison Service has been trying to clamp down on the smuggling of illegal items into the prison.

According to media reports, during the raid, prison authorities seized cell phones and improvised weapons and other illegal items from the prisoners.

A full investigation is underway and security has been beefed up around the jail. Several roads close to the jail have been completely closed off to traffic.

Frontline Workers In Guyana First To Get COVID-19 Vaccine; Other At-Risk Groups Will Also Be Prioritised