GEORGETOWN, Guyana, Mar 4, (CMC) – Public Security Minister, Khemraj Ramjattan, and Minister of State, Joseph Harmon, today met with a group of prisoners, following three days of unrest that resulted in the death of 17 inmates and several others injured.

Harmon told reporters, that he believed the talks were useful, adding, “I think it will endure to the benefit of the whole security situation not only here in the prison, but in the country, because people have families and their families are concerned about what is happening here, and so we believe that what happened here, this morning, will ease the situation a bit.”

At least 12 inmates met with the ministers, telling them about the poor conditions in the Camp Street jail, limited telephone communication with families, poor quality food and inhumane conditions. They claimed also, that several of the prisoners were left to burn to death on Thursday.

As the prisoners left the meeting, they shouted to reporters that they were pleased that the ministers came to meet with them. 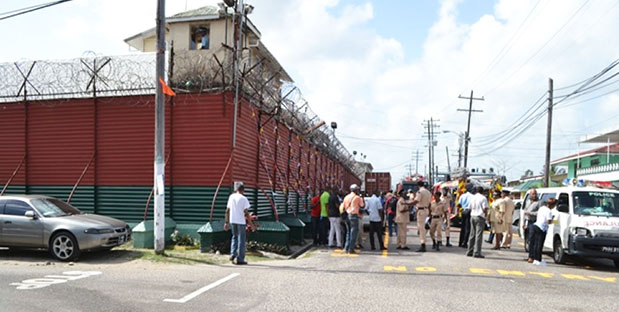 Ramjattan said, the government would be examining the concerns raised by the prisoners with a view to having them addressed.

“Those matters that could be dealt with administratively, ministerially, we are going to deal with them almost forthwith, but those that will be dealt with more technically, getting evidence and all of that, those will be dealt with by the three-member investigation panel,” Ramjattan said, adding, that the Board of Inquiry will also be taking statements and testimonies from the prisoners.

Harmon said, the government has gotten in to sort of “a gentleman’s agreement” with the inmates adding, “the important thing is that they have given us a commitment that when they get back into the prisoners, that they will speak with the other prisoners to ensure that there is no further escalation in what is taking place this morning, so I think we have a sort of a gentleman’s agreement on both sides”.

Ramjattan said, some of the issues raised would be addressed immediately, and that steps would be taken to address the others by the Board of Inquiry.

“That Board of Inquiry will start as soon as possible to hear the complaints of the prisoners, and I want as many prisoners to give the evidence of what is happening and the systems in place and, all of that, for purposes of remedying that which they are complaining about,” he said.