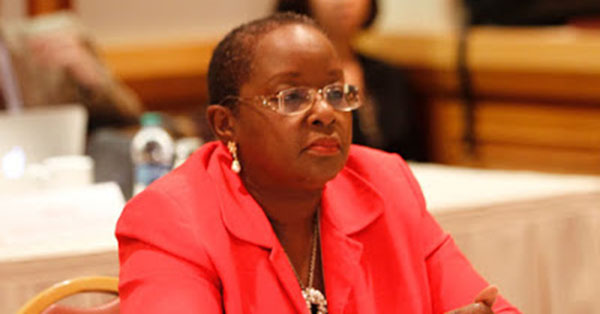 Photo above is of T&T Planning and Development Minister, Camille Robinson-Regis, who said, that details of her banking transactions with First Citizens Bank had been leaked to the media.

Rowley told a news conference, that a clear breach of confidentiality occurred, after Planning and Development Minister, Camille Robinson-Regis, said, that details of her banking transactions with the bank had been leaked to the media.

The Prime Minister told reporters, whatever the transaction, the bank has a duty of confidentiality.

“I’m sure the bank is not happy, because the story is out there. In this case it’s a Minister of Government, but it could easily be somebody else,” Rowley said, detailing his own experiences with the financial institution.

Robinson-Regis closed her accounts at the bank, earlier this week, after the Trinidad Express newspaper published a story that she had been asked by the investigations unit of FCB to declare the source of TT$93,000, deposited by her, at its Arima branch, east of here.

“The Express was informed that an issue arose when Robinson-Regis, allegedly, deposited some TT$150,000 at First Citizens, Arima. She has since said, it was TT$93,000 and not TT$150,000,” the paper said, quoting “sources’ as telling it, that “the bank’s internal investigative unit picked up on the transaction and called Robinson-Regis to explain the source of funds as a declaration form was not submitted”.

Robinson-Regis later said, that the funds “which represented my salary had been deposited in Republic Bank from September to January.

“The money was declared using the source,” she added.

In a statement, FCB said, that in light of recent events, it wanted to “assure the public that we consider the confidentiality of our customers’ business as our highest priority.

“As a consequence we have a Code of Ethics and Conduct to which each employee must sign, confirming their adherence to its terms, on an annual basis. Breach of the code is a dismissible offense.

“We also adhere, rigorously, to all banking regulations, including those related to Source of Funds declarations. First Citizens is a strong and solid financial institution, a fact which has been recognized by the international agencies, as recently as last year,” the bank said, in its brief statement.