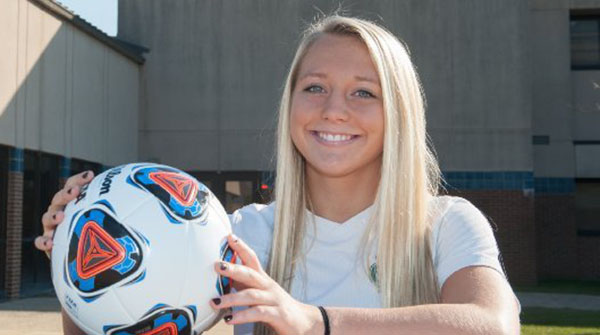 Jamaica’s Under-17 Women’s Soccer Team Routed By US, As Tagliaferri Bags Four Goals

Photo above: Frankie Tagliaferri, who scored four goals, off the bench, for the US. Photo was taken at Colts Neck High School, Colts Neck, NJ, on Wednesday, November 25, 2015 by Russ DeSantis for NJ Advance Media.

ST. GEORGE’S, Grenada, Mar 5, (CMC) – The Jamaican women’s under-17 soccer team was routed, 8-1, by the United States team, after second half substitute, Frankie Tagliaferri, fired a sensational beaver-trick to headline their Group B encounter, on day two, of the CONCACAF Under-17 Women’s Championship here Friday.

Entering the contest at the Grenada National Stadium in the 70th minute, Tagliaferri notched goals in the 72nd, 75th, 81stand 87th minute to condemn the Jamaicans to a heavy opening loss.

Vivanna Kuhlmann also netted a hat-trick, while Ashley Sanchez added another goal, as the US eased to a 2-1 lead at half-time, before exploding after the break.

Jamaica got on the score sheet through Shayla Smart.

The defeat left the Caribbean side at the bottom of the group, without a point, while the US is at the top with three points. Mexico also have three points, but lie second by virtue of an inferior goal difference.

Kuhlmann opened the scoring in the 15th minute, before Smart levelled for the Jamaicans with her 32nd minute strike.

However, Kuhlmann restored the Americans’ lead, two minutes later, to keep the powerhouses on top, at the break.

Afterward, however, the US stretched its lead, as Kuhlmann completed her hat-trick in the 49th minute and when Sanchez found the nets in the 56th minute, Jamaica was faltering badly.

Tagliaferri then put an exclamation mark on the contest when she entered 20 minutes from the end.

In the other game played in the group, Mexica downed Costa Rica 4-2.

The competition continues today at the Grenada Athletics Stadium with the French-Caribbean side, Haiti, tackling Guatemala and hosts Grenada taking on Canada.