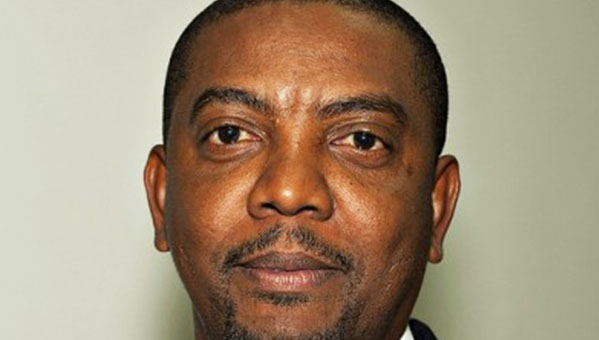 Photo above: WICB President, Dave Cameron, who announced today, that a team would now be set up to look at recommendations from the Lucky, Patterson and Wilkin Reports, which were yet to be implemented. Photo courtesy of the WICB.

KINGSTON, Jamaica, Mar 6, (CMC) – The West Indies Cricket Board (WICB) said, today, it would revisit the findings of the Lucky, Patterson and Wilkin Reports to re-assess their relevance, but has, once again, dismissed the recent CARICOM-commissioned Governance Review Panel recommendation that has called for the “immediate dissolution” of the entire board.

In a move likely to worsen tensions between the WICB and CARICOM, the WICB Board of Directors, at yesterday’s Annual General Meeting (AGM) here, once again, emphasized their stringent opposition to the Panel’s main recommendation, with all six member boards signing a statement of opposition to any attempted implementation.

Last December, the Board of Directors slammed the recommendation to dissolve it as “impractical” and an “unnecessary and intrusive demand”, and said, today, they were standing behind that position.

“We, the full members of the West Indies Cricket Board, do hereby respectfully disagree with the call for the dissolution of the board, and we stand by the ‘position paper of the West Indies Cricket Board’ in response to the recommendations of the CARICOM Review Panel on Cricket Governance, which was issued on the 23rd day of December, 2015,” said, the signed statement, a copy of which was issued by the WICB. 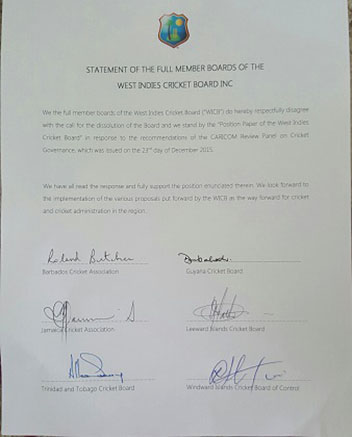 The statement of opposition to the CARICOM Governance Review Panel recommendations, which was signed by WICB Board of Directors. Courtesy of the WICB.

“We have all read the response and fully support the position enunciated therein. We look forward to the implementation of the various proposals put forward by the WICB as the way forward for cricket and cricket administration in the region.”

The WICB’s move comes just weeks after CARICOM prime ministers firmly endorsed the Panel’s recommendations at their 27th Intersessional meeting in Belize, and “affirmed that they must be implemented.”

Further, CARICOM said, it would “explore all options available to achieve the desired outcome of improved governance of West Indies cricket.”

Grenada’s Prime Minister, Dr Keith Mitchell, said then, that the WICB did not have the final say on whether the report’s recommendations would be implemented.

“The fact that we have said, that we will use all options to ensure that the report is implemented, the West Indies Cricket Board can say it is dead, but they may not have the wherewithal to ensure that it is dead,” Mitchell added.

While ignoring the Governance Review Report, WICB President, Dave Cameron, announced today, that a team would now be set up to look at recommendations from the Lucky, Patterson and Wilkin Reports, which were yet to be implemented.

The WICB has been criticized, heavily, in the past, for ignoring the major recommendations of these reports, relating to the restructuring of its governance structure.

“The terms of reference of this team, will focus primarily on the recommendations that have not been implemented, and for the team to examine if there is an opportunity to bring anything back to the Territorial Boards and the WICB for adoption by the shareholders,” Cameron said.

He added, “Once that process is complete, a change management expert will be brought in to complete the process for a smooth transition.”

The team will be headed by WICB independent director, Don Wehby, and will include Clifford Reis and Ricky Skerritt, along with three other members, yet to be appointed.

However, the WICB has criticised the panel’s investigations as, “limited in scope” and said, this had “triggered findings and recommendations … which are not supported by the facts.”