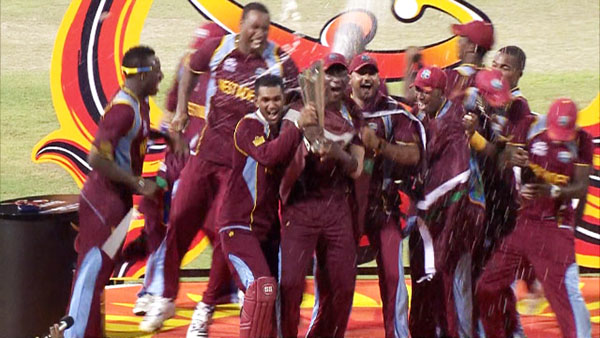 Photo above: Players of the West Indies men’s cricket team, celebrate being named the 2012 champions; the team will enter the ICC T20 World Cup, second in the rankings. Photo credit: ICC.com.

DUBAI, United Arab Emirates, March 7, (CMC) – The West Indies men’s cricket team will enter the Twenty20 World Cup in India, second in the ICC rankings, with the hosts installed as the top-ranked side heading into the March 8 to April 3 global event.

In the latest rankings released today, India topped the tables with 127 points, nine clear of West Indies in second. South Africa lies third also on 118 points, while New Zealand is fourth with 116 points.

Pakistan, which won the 2009 men’s tournament staged in England, is seventh on 110 points, while reigning champion, Sri Lanka, languish one point behind in eighth.

India’s place at the top was assured when they beat Bangladesh in the final of the Asia Cup in Mirpur yesterday.

The ongoing three-match series between South Africa and Australia is currently tied at 1-1, but the decisive third game on Wednesday, in Johannesburg, will have no impact on India’s ranking.

West Indies briefly led the T20 rankings in mid-January without lifting a hand, after Sri Lanka lost their series 2-0 to New Zealand.

The Caribbean side can make huge strides in the rankings, depending on their performance in the upcoming World Cup.

Installed in Group 1, they open their preliminary campaign against England on March 16 in Mumbai, clash with Sri Lanka four days later in Bangalore, before taking on South Africa on March 25 in Nagpur.

The 2012 champions close out against a yet-to-be determined qualifier from Group B, comprising Scotland, Zimbabwe, Afghanistan and Hong Kong.