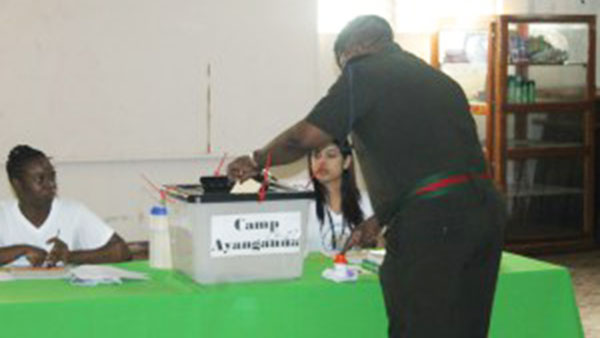 Photo above: Chief of Staff of the Guyana Defence Force, Brigadier Mark Phillips casting his ballot at Base Camp Ayanganna. The green table cloth can be seen. (Photo courtesy Demararwaves.com).

The rest of the population is due to vote on March 18.

The now opposition People’s Progressive Party Civic (PPP/C) won the last LGE and is urging supporters to ensure it is victorious this time round, so as to keep the new coalition A Partnership for National Unity (APNU) and the Alliance for Change (AFC) government in check.

But as the voting began here, concerns were being raised as at least one candidate has questioned the use of green table cloths at one of the polling booths at the Guyana Defence Force (GDF).

PPP/C representative, James Cole, told reporters at the GDF’s Camp Ayanganna Headquarters, that he was concerned that green table cloths were being used at the three polling stations there.

“The setup, the layout is okay, but why are we using political colours, which I noticed, that the tables are laid with green table cloth,” said Cole.

Green is a colour closely associated with the APNU.

GDF Chief-of-Staff, Brigadier Mark Phillips, said, that the Guyana Elections Commission (GECOM) rather than the GDF was responsible for preparations.

“That is a complaint for GECOM. This whole process is controlled by GECOM and I rather suspect the table cloth came from GECOM. If it’s a GDF table cloth then obviously the colour of the GDF is green so I don’t see how that should be a problem,” he said.

Independent candidate, Malcolm De Freitas, told reporters that, earlier Tuesday at a Guyana Police Force polling station, he intervened after noticing two policemen entering the polling station with guns which was against the law.

“They did not know and that is what worries me. If I did not bring it to their attention they would have walked into a polling station with a live weapon on them and I find that particularly disturbing, That to me is an unusual act and it should not have occurred,” he said.