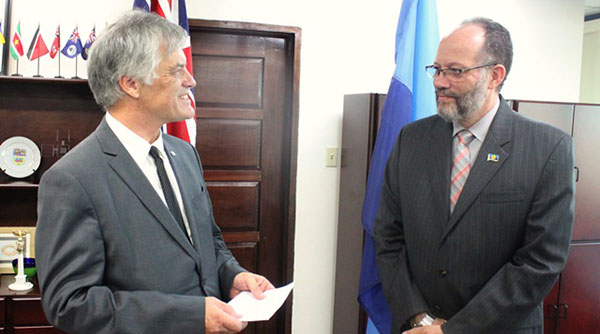 GEORGETOWN, Guyana, Mar. 10, (CMC) – Secretary General of the Caribbean Community (CARICOM), Irwin LaRocque, has lauded Australia for the role played in building human and institutional capacities in the region.

The Secretary General made the remarks, as he accepted Letters of Credence from new Australian Ambassador to CARICOM, John Pilbeam, here, yesterday.

He also thanked Australia for its support of the Community’s response to climate change, and advocacy on the international stage on political and economic issues.

Secretary-General LaRocque, however, urged Australia’s advocacy on the issue of graduation of small, middle-income countries from access to concessional funding, noting, that for small states to truly benefit from global arrangements for sustainable growth and development, such as the 2030 Development Agenda, the Financing for Development outcomes, and the COP 21 commitments; access to development funding was necessary to bolster development efforts.

“CARICOM is painfully aware of the OECD and some development partners’ policy on graduation of small, middle-income countries from access to such funding. GDP alone does not adequately reflect a country’s level of development, in particular among SIDS. Criteria such as vulnerability which is inherent among SIDS, must also be taken into account in order to facilitate a more realistic measure.

“Already countries in Australia’s own neighbourhood, such as Japan, are embracing this reality. It would be a meaningful and substantial gesture if Australia were to adopt a similar position.

“We are aware that Australia is an upstanding member of the OECD Development Assistance Committee and we hope we will find an understanding ear from your country on this issue,” LaRocque told the new emissary.

Pilbeam recalled, that his interactions with the Caribbean Community dates back to 1977 when, in Georgetown, Guyana, he met Sir Meredith Alister McIntyre, who piloted the movement for integration as Secretary-General from 1974-1977.

He noted, that almost four decades later, “CARICOM should be proud of what has been achieved in forty years.”

He said, Australia has been pleased to support the Community through development packages that will be closer to $US 70 million on completion.