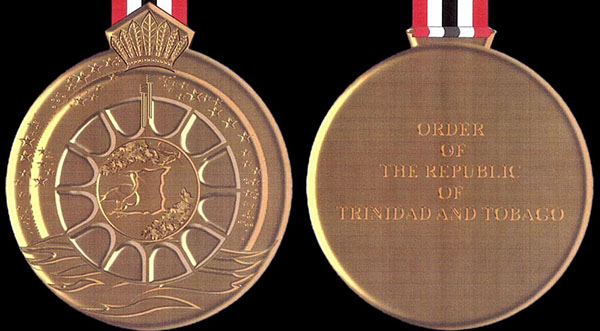 PORT OF SPAIN, Trinidad, Mar 11, (CMC) – The Trinidad-based conglomerate, ANSA McAL Group, has bought the Order of the Republic of Trinidad and Tobago (ORTT) after President, Anthony Carmona, expressed his disgust at the attempt to sell the country’s highest award on the social website, Ebay.

THE ANSA McAL Group paid US$25,000 for the ORTT that was awarded posthumously, in 2012, to the late labour leader, Adrian Cola Rienzi.

The statement quoted the Head of the ANSA McAl Group, Norman Sabga, as saying, “despite the incidence of higher bids on the eBay site, ANSA McAL secured the agreement of the store, Crawford Coin Stamp Militaria in Vancouver, British Colombia, to pull down the auction and recognise our initial bid.”

He said, that move has ensured the medal’s return to Trinidad and Tobago and so preserve its honour and dignity.

“I am filled with pride and joy that we were able to ensure that this cherished national award will soon be on its way back to Trinidad and Tobago,” said Sabga, adding, “there are many moments in my life when I have felt we have done something really worthwhile, but nothing can outmatch this by the sheer significance of its national patrimonial value and meaning.”

Sabga added, that the Group came to an agreement with the owner of the store that, given the historic significance of the medal, and in consideration of ANSA McAL’s noble intention to reclaim the award on behalf of Trinidad and Tobago, all other bids would be closed”.

He said, he would seek Carmona’s support to donate the ORTT to the National Museum. Earlier this week, Carmona issued a statement saying, “I am very much distraught at the prospect of someone peddling the symbol of our national honour and pride.”

“The Order of the Republic of Trinidad and Tobago is not a rag doll that is disposable; this ultimate symbol of our Nation’s pride and honour is sacrosanct.

“Maybe the time has come that all persons who are so honoured or their representatives, sign a contract giving the Office of The President (OTP) the first option to buy the medal in the event of intended disposal/sale; or better still, amend the law to absolutely prohibit the sale/disposal of the ORTT medal. We need to create our very own international benchmark as it relates to our ORTT medal,” said President Carmona.

Rienzi was one of three people given the award in 2012. The other two being the late former prime minister, George Chambers, and Olympic gold medallist, (javelin) Keshorn Walcott.

The 18-carat gold medal, is packaged with the original award document, signed by President George Maxwell Richards and stamped with the presidential seal.