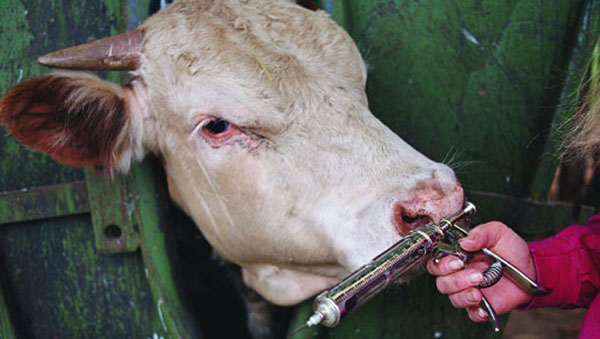 Caribbean Warned Against The Dangers Of Overuse Of Antibiotics In Animals

Photo above is of a cow being injected with antibiotics. Photo credit: MicrobeWiki.kenyon.edu.com.

GEORGETOWN, Guyana, Mar 12, (CMC) – Caribbean countries have been urged to implement measures to deal with the overuse of antibiotics given to animals, as this may lead to resistant bacteria and resistance genes, that could spread from these animals to humans, through the food-chain.

In a joint statement, marking World Consumer Rights Day, the Caribbean Community (CARICOM) Competition Commission (CCC) and the Caribbean Health and Food Safety Agency (CAFHSA) say, they fear “antibiotics resistance” could occur if measures are not taken to deal with the situation.

“The overuse of antibiotics in livestock is a growing concern, largely because it allows resistant bacteria and resistance genes to spread from these animals to humans through the food-chain. As a result, human infections with antibiotic resistant bacteria can be difficult or impossible to cure, and may lead to death in some instances,” they said.

The two agencies warned, that because livestock and foods of animal origin are traded worldwide, this could contribute to antibiotic resistance in countries which are far removed from where the problem originated.

“The need to act now in the Caribbean Community (CARICOM) is therefore imperative, given the fact that, as net food importing countries, the member states of CARICOM are certainly not immune to this new global threat.”

In 2013 alone, the region imported approximately US$19.8 billion in meats and edible offal from extra-regional sources.

“Additionally, many CARICOM countries are home to several international fast food restaurants, such as McDonalds, Burger King and Kentucky Fried Chicken (KFC), which may import meats and meat products consumed in large quantities by nationals.

“Consequently, a careful approach must be taken and strategies developed and implemented to protect CARICOM consumers from antibiotic-resistant foods and the dangers associated with them,” the two agencies said, adding, that they believe that “holistic, inter-sectoral and multifaceted approaches must be developed, both at the national and regional levels in CARICOM.

“This integrated approach would facilitate the effective coordination of resources and actions needed to control the importation, sale/distribution, and, most importantly, the use of antimicrobials in order to deal with this critical issue.”

The CCC said, that it is also of the view, that national consumer protection agencies (NCPAs) within the region have a significant role to play in national strategies to curb antibiotic resistance caused in this manner.”

“NCPAs are designed to protect the rights of consumers, as well as to ensure the availability of accurate information about products in the marketplace. As such, NCPAs are ideally equipped to collaborate with other national stakeholders and agencies, to raise public awareness of antibiotic resistance, and to prevent its development and spread in the food-chain.”

The two agencies said, that at the regional level, CARICOM has identified antimicrobial resistance (AMR) as an important public and agricultural health issue, and made reference to conferences held in Suriname and Trinidad and Tobago, over the last two years, where positions against AMR were adopted.

“An outcome of the 2015 workshop was agreement on the need to control the use of antibiotics in animal husbandry and in human health, through an integrated AMR Surveillance System at the national level and to collect relevant data that will assist regional institutions in making informed decisions.

“Consequently, CAHFSA is in the process of putting a system in place to collect data on the use of antibiotics in animal husbandry in member states, and to establish electronic data bases nationally and regionally, to process this data, to assist the region in making informed decisions.”

The two agencies added, that while several CARICOM institutions have vital roles to play in tackling this very serious issue, “an integrated strategy needs to be developed for regional institutions responsible for protecting consumer welfare, whether directly or indirectly.

“In this regard, the CCC intends to collaborate with these agencies to develop a communications strategy to educate CARICOM consumers, and to ensure that mechanisms are in place to carefully monitor the importation of meats from extra-regional trading partners,” the joint statement noted.