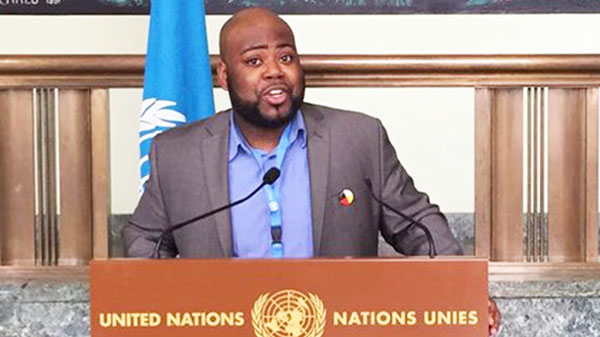 TORONTO, Ontario — The African Canadian Legal Clinic (ACLC) is pleased with a report from the United Nations Committee on Economic, Social and Cultural Rights (CESCR) that criticizes Canada for rights violations of African Canadians.

A coalition of organizations, made up of Colour of Poverty – Colour of Change steering committee members – the Metro Toronto Chinese and South East Asian Legal Clinic, the Ontario Council of Agencies Serving Immigrants and the ACLC – attended the 57th session of the CESCR which was held in Geneva, Switzerland on February 25 and 26.

Although 33 Canadian civil society organizations made submissions to, or attended, the session, the ACLC was the only one to represent the interests of Canada’s African Canadian population, highlighting the many manifestations of anti-Black racism across Canada.

Anthony Morgan, policy and research lawyer at the ACLC, who attended the meeting, said, he hopes that Canada puts in place things to address the UN committee’s observations by the end of this year.

The ACLC is pleased that in its Concluding Observations, the UN CESR adopted a number of critical recommendations that were proposed and advocated for by the legal clinic.

The committee recommended that Canada undertake systemic measures to better protect and promote the economic, social and cultural rights of African Canadians in the areas of unemployment, child welfare, the right to health, the right to education, and the enjoyment of cultural rights.

In all of these areas, the over-representation of African Canadians among Canada’s most disadvantaged and marginalized was raised as a pressing concern of the UN CESCR.

The committee also called on Canada to collect race-based disaggregated data, so as to ensure mobilization of resources sufficient for implementing economic, social and cultural rights, with special attention paid to disadvantaged and marginalized individuals and groups.

Morgan said, there were about 15 people, mainly policy staff, representing the federal, provincial and municipal levels of government of Canada attending the session.

‘The idea is civil society organizations attend and participate in this process to potentially lobby the members of the CESCR so they produce shadow reports and then distill those shadow reports into smaller questions that those committee members can then ask Canada directly,” said Morgan.

He said, the Canadian delegation was asked specific questions that the different organizations had put forward.

Morgan said, after the questions are asked and the answers are given from Canada, the committee puts together concluding remarks and where it did not receive satisfactory answers, or none of Canada’s responses effectively refuted anything an organization had said, then the committee expresses a concern about a particular issue.

The lawyer said the issues identified with regard to African Canadians are all areas where Canada is not meeting its international obligations to the community.

Morgan said, international processes like these are not binding on Canada.

“But what it does is it has an impact on their international capital and credibility, essentially. So, it’s really a reputational question that we’re looking at, and so, in terms of getting the Canadian government to respond at the various levels — so the Canadian government, our provincial governments and also our municipal governments – it really is up to community and leaders and organizations to take these recommendations from the United Nations and use that and fuse their advocacy, their organizing, their education with that to say look, we are working to address these issues, even the United Nations itself has acknowledged that this is a problem.”

The policy and research lawyer said, these recommendations hinder Canada’s ability to hold itself out as “this great country where things are okay, where multiculturalism is benefitting all Canadians.”

He added, this was specifically brought up during the hearing when one of the committee members said outright, “I understand that you are proud of this thing you call multiculturalism but as far as my understanding goes this multiculturalism benefits primarily white people, whereas racialized people fall under that in various different ways but it still hasn’t displaced that racial hierarchy.”

Morgan said, this left the Canadian government delegation, which was overwhelmingly white, except for one black person from the Ministry of the Attorney General of Ontario, very uncomfortable.

‘This process helps Canada be more honest about how it’s serving and how it’s not serving its various populations,” he said.

The ACLC said, among the most significant and pleasantly welcomed recommendations from the UN Committee is the one that states, in part: “The Committee recommends that the State party promote, and increase the funding to, the art and culture of African Canadians, and to this end, use the International Decade for People of African Descent, proclaimed by General Assembly, as a vehicle to promote and protect the human rights of this group.”

This recommendation is related to the fact that the period 2015 to 2024 has been declared by the United Nations as the International Decade for People of African Descent, under the theme “Recognition, Justice and Development.”

Morgan said as far as his research goes this is a new area of concern and he does not recall it being put to the committee before now.

“My understanding is that in previous attempts to lobby at this level that issue of arts and culture wasn’t put forward. My interest in participating in this process now was to recognize the power of the arts and our culture to facilitate and foment change in our community. And so, I took a very serious interest in saying that even though we hadn’t spoken about that before, and while we’re a legal organization and not an arts and culture organization, it’s still a right. And so, I was very much interested in pushing the human rights argument of that because this is a binding treaty, like the overall treaty itself is binding on Canada. Canada has agreed to uphold it in the international setting.”

Morgan said this creates rights and opportunities for the arts and culture to thrive, but consistently if one looks at the funding and the support for black arts and black artists in Canada, “we’re marginalized, if not entirely ignored.”

“I wanted to, in shaping my submission, and putting the question to the committee to ask Canada and I’m happy that they did take what I put before them to push Canada to do more, especially in the context of the International Decade for People of African Descent. I felt that was important as a vehicle that Canada has been totally silent on.”

He said the former government would have been hostile to this, however, now there is an opportunity with the new government to have that acknowledgement and actual commitment to resourcing activities, a strategy, a plan of action for addressing anti-black racism and promoting and protecting the rights of black people, especially through the arts and culture.

“We are pleased to see these concluding observations from the UN Committee. They send a strong message that Canada must engage the African Canadian community and work with us to properly fund, develop and adopt a coordinated and comprehensive strategy for addressing anti-black racism across Canada,” said Margaret Parsons, the executive director of the ACLC.

As someone based in Ontario, Morgan said, he is cognizant of the fact that the political parties are starting to get into election mode in the provincial context.

“In the same way we’ve seen acknowledgement on the Anti-Racism Directorate, we’ve seen talk about movement on the child welfare file, and carding and street checks, they’ve made important moves in that direction, which I think I could fairly say there’s a consciousness about the fact that Liberal Party is going to be held to account on the issues in the upcoming election.”

Morgan said, the international decade ends in 2024 and although it seems a long way from now he anticipates that it will go by quite fast.

“My very deep concern is that we’ll look back, it’ll be 2025 and we’ll say what did we do as a community to really take advantage of this opportunity to push and leverage with the space that was given to us by the United Nations.

“We can’t expect and wait for them to come down with a plan for us and our interest. I think it’s on us to recognize that the overarching setup has been there, the infrastructure of ideas about the international decade and the program of action is right there on the website. We can all access it.

“Now we have to strategize to think through at the various levels – our city, our province, our federal government – how do we put this in place. And so, my general interest also in participating in this process in the way I did, naming this specific international decade, was to also encourage us as a community to come together and advocate around it,” he said.

The coalition of organizations is calling on all orders of government in Canada to work with civil society and its indigenous counterparts on developing an action plan to implement all of the recommendations made by the UN Committee.