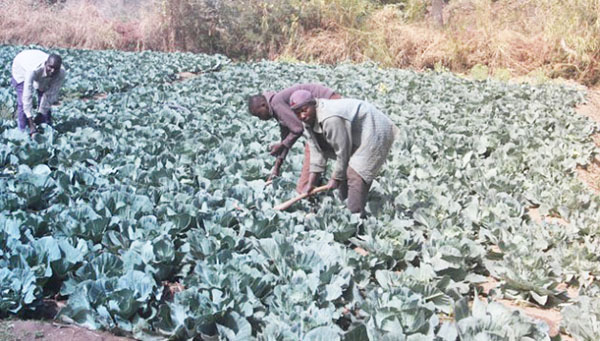 YAOUNDE, Cameroon, Mar. 18, 2016 (IPS) — “They have reduced the quantity of food they used to give us and we still do not know why. But we are managing. We are refugees and we have no choice. All they give us is rice and some soya beans” John Guige, a Nigerian resident and primary school teacher in the Minawao refugee camp in Cameroon’s Far North region, told IPS.

John Bouba, who fled the Boko Haram insurgency in Nigeria and resides in the Minawao Camp, stated, that when they receive rice from the camp, “we sell half of it in the local market. We use the money to buy corn which we mix with some of the rice and grind it. After the third week, we eat rice till the next monthly rations of food are shared”.

Bouba says, it appears there is a shortage of food in the camp.

“We don’t know why but we are grateful to the people providing the food we eat. We cannot compare it to what we used to eat while at home in Nigeria. We worked and earned it. Here we are obliged to sit and wait on people of goodwill to support us”, he says.

The drop in food supply in the camp is part of a region-wide problem in Cameroon’s Far North being exacerbated by insecurity. Felix B.F. Gomez, country director of the United Nations World Food Programme (WFP) for Cameroon, told IPS in an interview that the food insecurity situation sharply deteriorated in 2015 alongside the intensifying violence.

Minister Tchiroma also told a news conference in Yaounde, in mid-February, that Cameroon’s armed forces carried out a raid in a Nigerian border village, Goshi, during which they killed 126 insurgents and freed one hundred people held captive by the group.

The Logone and Chari division is one of the administrative areas along Cameroon’s border with Nigeria that have suffered repeated Boko Haram attacks.

A November 2015 government assessment revealed a cereal deficit of about 50,000 metric tons compared to population needs in the division.

The division is one of three in Cameroon’s Far North region which hosted a total of 75,000 Nigerian refugees and 82,000, as per a report presented June 2015 in Yaounde by Enow Abrams Egbe, inspector at the ministry of territorial administration and decentralisation.

The other two are Mayo-Sava and Mayo-Tsanaga. The assessment put the total food deficit in the entire region at 132,000 tons. The Mayo-Tsanaga division hosts the Minawao camp which according to the United Nations Children’s Emergency Fund, provided shelter for 7,000 refugees from Nigeria when it was opened in July 2013.

The United Nations High Commissioner for Refugees says the camp in which water, food and shelter remains among main concerns, housed over 48,601 refugees last October.

According to Gomez, “the number of admissions into nutrition programmes continues to increase following deterioration of the food security and nutrition situation in districts affected by the Boko Haram crisis. The situation is becoming more serious as insecurity and access restrictions often hamper regular supply to remote areas and several health facilities have been closed down due to insecurity.”

“In 2016, we expect that over 150,000 children under five and more than 30,000 mothers are in need of emergency nutrition assistance. This situation could continue to deteriorate if an adequate response is not provided due to insecurity, poor harvests and increased pressures caused by population displacement,” Gomez said.

While WFP and humanitarian partners are said to have triggered improvements in malnutrition rates in the Minawao refugee camp, decreasing the global acute malnutrition rates from over emergency thresholds in early 2015(around 19 per cent) to less than 7 per cent in December 2015, Gomez stressed that, “the nutrition situation remains critical outside the camp as well as in the entire region and further efforts are needed”.

There could be hope for victims of food insecurity in the Far North region as the government of Cameroon and partners launched a National Humanitarian Response Plan for 2016 on January 25, in Yaounde.

Rene Emmanuel Sadi, Cameroon’s interior minister who launched the plan said it requires US$282 million to provide protection and assistance to 325,000 refugees and internally displaced persons in Cameroon.

Tony Lanzer, UN sub-secretary general and regional humanitarian coordinator for Sahel, holds that the principal objective of the plan is to fight poverty and re-establish security in conflict zones.

Najat Rochidi, UN humanitarian coordinator for Cameroon, said the Response Plan, launched alongside a regional plan for Nigeria and the Central African Republic, would also handle issues of food insecurity and malnutrition.

“The food security sector needs $85.3 million for its response in 2016. WFP alone requires nearly US$40 million to implement assistance in the Far North in 2016, and so far only 51 per cent of these requirements have been met”, said Gomez.