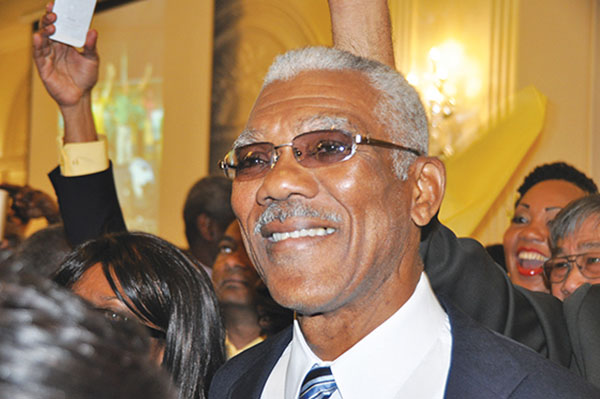 Photo above: Guyana President, David Granger, seen in Toronto, before the Guyana election in May 2015. Photo by John O’Dell.

NEW YORK, New York Mar 19, (CMC) – Guyana’s President, David Granger, will be the Grand Marshall of the 2016 Guyanese-American Unity Parade and Mashramani in New York City on June 12, the organisers have announced.

The Brooklyn-based Guyana 50th Independence Anniversary Celebration Committee (New York) said, that Granger will also address a Unity Rally, at the end of the parade, to conclude “Guyana Jubilee Week” in New York.

It will be Granger’s first address to Guyanese nationals in New York since his election to the presidency in May 2015.

Several celebrities of Guyanese heritage; including actors, singers, professional basketball, soccer and football players will also march in the parade, the Committee said.

The parade, the second annual Guyanese American parade in Brooklyn, will commemorate the historic 50 years of Independence of the Republic of Guyana. Guyana gained independence from Great Britain on May 26, 1966.

The parade will start on Church Avenue at Bedford, proceed east to Ralph Avenue, south on Ralph Avenue to Flatlands Avenue and West into South Shore High School Park, where Granger will address the Unity Rally.

The Committee said, it has collaborated with the Guyana New York Consulate and United Nations Mission in planning “a spectacular Golden Jubilee celebration for the New York metropolitan region, from June 4 – 12, 2016.

The “Guyana Jubilee Week” will be held under the theme: “Reflect Our Journey: Forging Unity and Embracing Modernity.”

Granger, Prime Minister, Moses Nagamootoo, and other officials of the government of Guyana, as well as US federal, state and local officials, will be guests of honour at various “Jubilee Week” celebration events, the Committee said.