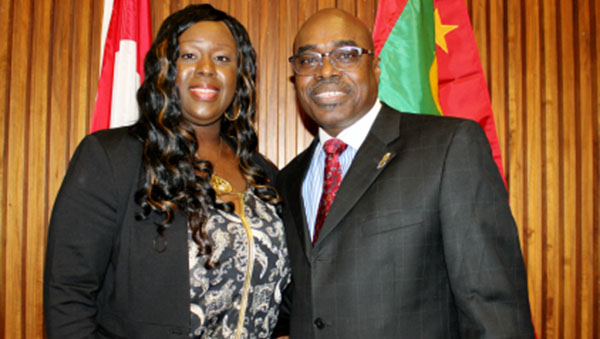 Transition At Grenada Consul Office In Toronto: James In; Augustine-Kanu To Brussels

James made the announcement, last Friday, in Toronto, in his first public meeting as Consul General.

In his address at the “meet and greet’’, James – who also is Grenada’s Ambassador for Diaspora and Humanitarian Affairs – emphasized the importance of team work in the delivery of service.

Prior to Friday’s public gathering at York Civic Centre, James, Wharwood and Blaize met with the Organization of Eastern Caribbean States representative responsible for coordinating the farm workers’ program.

“One of the things we’re looking at is to try to increase our quota of Grenadians coming to the farms here in Canada,’’ James told the public meeting that was chaired by Dawne Francois, the Grenada Tourism Authority’s director of sales and promotion for Canada.

“We are going to do everything to ensure we get more farm workers into Canada,’’ James promised. “I’d be sending a report to the government pretty soon, so that we could see how we could work to increase our numbers.’’ 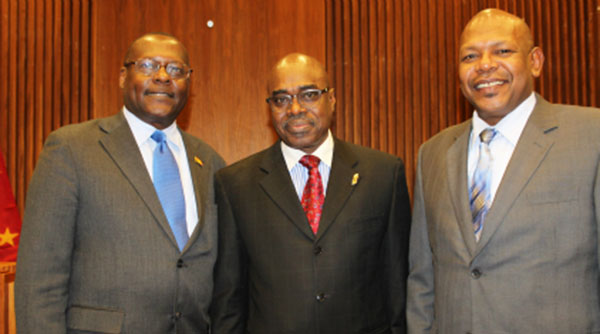 James, who has lived in New Year City for 30 years, left a private sector job there when he was offered the position of Honourary Consul General to New York in 2008 by the Grenada government.

As Consul General in Toronto, he replaces C.J. Augustine-Kanu, whom he thanked for her service here.

Augustine-Kanu, daughter of well-known educator and former Liberal MP Jean Augustine, has been promoted by the Grenada government.

She’s been appointed the country’s top diplomat in Brussels, Belgium.

Speaking at Friday’s meeting, she said, the “transition’’ to James had taken place “as of last Thursday’’, when she became “Her Excellency, Ambassador C.J. Augustine-Kanu’’.

She has welcomed her assignment in Brussels, describing it as the opening of “an incredible brand new door’’.

“It has been the most amazing experience working for the Government of Grenada and the Toronto Consulate,’’ Augustine-Kanu said, in a farewell letter earlier this month.

“As I take up this important (and new) diplomatic post as Ambassador, I am blessed to say that this new position will be my fourth time (and post) working for the Government of Grenada.’’

“Being both a Canadian and a Grenadian, this ‘dual-ness’ has allowed me to continue to raise the profile of Grenada (on the mandate side) within the City of Toronto, across Ontario, nationally across Canada, and also most importantly — internationally.

“On the community side, it has been such an honour to have served all of you — both as nationals and friends of our beautiful tri-island nation — in the various capacities and numerous inquiries that have been made over the past two years.

“This level of work and assistance will continue overseas and therefore, strengthen the economic and social development of our nationals and nation in the city of Brussels in Belgium and surrounding Nations across Europe,” concluded Augustine-Kanu.

James said, he intends to engage Grenada associations across Canada, with plans to soon visit Montreal and British Columbia.

“My job is not sitting in the office,’’ said James, who already has met with the presidents of more than a dozen Toronto organizations.

An agreement was reached, James said, that the organizations will work annually on a joint project to help Grenada. This year’s venture will provide assistance in the form of books, bags and other educational supplies; as well as bed sheets, pampers and other items for the health institutions.

“We must work as one; whatever we do will be more meaningful and effective,’’ James said. “It’s just a matter of working together on those projects, whether they will give financial contributions or material contributions. We want to have a bigger impact in our contribution to the Spice Isle.’’

The new consul general said arrangement is being made, at the 90 Eglinton Avenue East office, to provide more privacy for those visiting the consulate general to discuss matters that require confidentiality.

He said in the past, the office also has been subsidizing the mail-out of passports to applicants. But, said James, the practice cannot continue and a $12 mail-out passport fee is being instituted.

James gave assurance that, as consul general, he will “maintain the highest esteem’’ of the office.

“I pledge to you tonight that I will provide and give you proper representation. You can depend on me,’’ James told his audience that included Grenadian-Canadians, as well diplomats and community leaders of associations from various Caribbean and African countries. Others included representatives of Canada Border Services and Caribbean Airlines.

“I am going to do everything to ensure your comfort. I mean it from the bottom of my heart,’’ James said.

“I want to be in every place to support my people. I don’t care about your political party support. As long as you are Grenadian, I’m here to support you,’’ James stressed. “I represent those who need help and I will do everything to help them.’’

Things have started “moving along’’ since his posting to Toronto, said James, who also expressed confidence in receiving ongoing support from the Grenada community and family members in the city.

“I’m happy to be in Toronto,’’ he said. “I really love the city. It (the job) is not a challenge that I think I cannot handle.’’