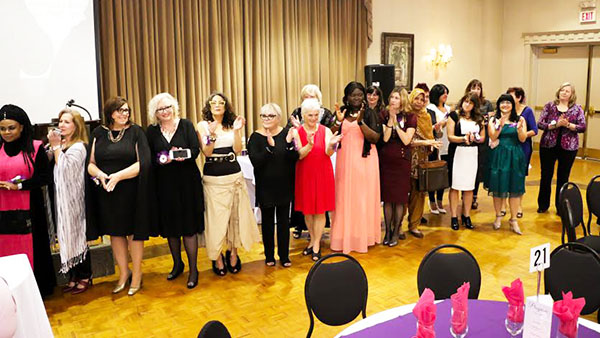 The award recipients of the inaugural Absolutely Fabulous Women Over Forty Awards. Photo courtesy of AFW.

Women Over Forty Honoured And Celebrated

HAMILTON, Ontario — The first Absolutely Fabulous Women Over Forty Awards (AFW), celebrating and honouring women over 40-years-of-age for their remarkable achievements and contributions to the communities they live in, was, according to its organiser, “a fabulous success”.

Founded by Rosanna Penilla-Bharucha, who also organizes the Golden Years Expo for older adults, the Hamilton-based event recognises diverse women entrepreneurs and those who work in the non-profit, arts, healthcare and education sectors.

The award winners were nominated by the public, then selected by independent judges.

The AFW awards celebration, which was held on Saturday, March 12 at the Michelangelo’s Banquet Hall, was attended by Mayor Fred Eisenberger, who extended greetings and congratulations from the City of Hamilton.

Also in attendance were Ambassador Derrick James, Grenada’s new Consul General in Toronto and Kyron Lewis, Past President of the Grenada Association of Toronto.

Coordinated by Event Specialist, Louise Noel-Ambrose, of EvenToBe, the show was emceed by Carrie Mullings, of Vibe1055, and the featured guest speaker was MPP Monique Taylor (Hamilton Mountain).

The awards’ charitable partner was FAB Foundation, a local charitable organization that aims to empower girls and promote healthy body images and lifestyles.