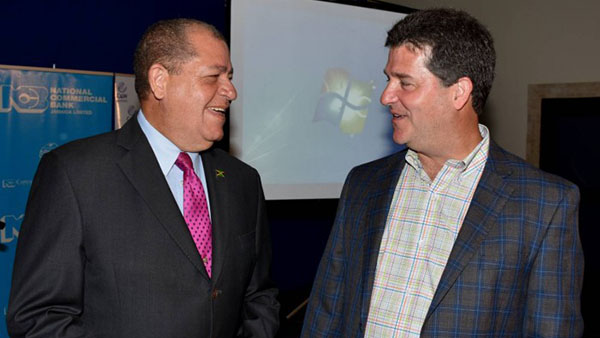 Photo above: Minister of Finance and the Public Service, Hon. Audley Shaw (left), in discussion with President of the Private Sector Organisation of Jamaica (PSOJ), William Mahfood, before the start of the PSOJ’s President’s Forum at the Jamaica Pegasus Hotel in New Kingston, today (March 29). Photo credit: Mark Bell/JIS.

NEW KINGSTON, Jamaica, March 29 (JIS) — Minister of Finance and the Public Service, Hon. Audley Shaw, assured Jamaicans that the government remains committed to fulfilling its plan, in the next fiscal year, to provide a tax break for persons earning up to $1.5 million.

“This promise is going to be kept,” the Minister said, as he addressed the Private Sector Organisation of Jamaica (PSOJ) President’s Forum, today, at the Jamaica Pegasus Hotel, in New Kingston.

Under the arrangement, income tax will be removed for persons earning a gross annual salary of $1.5 million or less.

This income tax break was one of the initiatives highlighted in the administration’s 10-point plan for economic growth and prosperity, outlined in its manifesto.

Shaw said, the government believes Pay As You Earn (PAYE) employees, to whom the proposal applies, deserve this tax break, after enduring a five-year wage freeze, as well as a 40 per cent devaluation of the Jamaican dollar, which has greatly affected their purchasing power.

While admitting that several challenges have been encountered, which may cause a delay in the actual implementation of the plan, the Finance Minister stated, that the administration was assessing a number of options to ensure that it is put in place.

“It is firm and irrevocable, and my commitment is that even if it doesn’t start April 1, because of the budgetary process, it will, at least, be retroactive to April,” he said, adding, that the pay cycle for PAYE employees is at the end of the month.

The Minister noted, that the Cabinet would be meeting for three days this week, starting tomorrow (March 30), and will have further discussions on the matter.

“We will complete that process this week, to mitigate the fiscal impact of this measure, and we remain confident that it can be accommodated within the context of broader tax reform, which is where we welcome the assistance of the private sector,” he said.

Further, to mitigate the expected shortfall in revenue, Shaw said, it is intended that the plan will be implemented in “different phases that we will put in place”.

He informed the forum attendees, that the government will now need to devise other solutions to finance the tax break, as one source of funding, previously anticipated, is not available.

“We had suggested that part of the pay back of the $1.5 million tax break would be, use of the tax on fuel that was supposed to be a special fund that was set aside. We have found that the oil hedge fund was not set aside, that it is actually already accounted for in the Consolidated Fund,” he explained.

This Fund is the principal government account to which all government revenues must be deposited and from which expenditure, via warrants, is withdrawn.

It was intended that $9.5 billion would be used from the gas tax to assist with funding the approximately $11 billion shortfall in revenue, anticipated from the tax relief.

“We have another plan,” the Minister noted, adding, further details will be disclosed after the Cabinet retreat or during his budget presentation.

In the meantime, Shaw said, the government also intends to stick to its promise of addressing, in the tax plan, the income band between $1.5 million and $1.8 million “to have more smoothness and equity”.