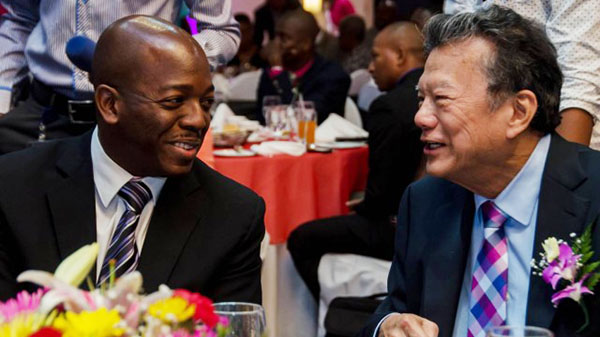 Committee To Advise On National Security Matters In Jamaica

NEW KINGSTON, Jamaica March 31, (JIS) — A committee, comprising private sector individuals, is to be established by the Ministry of National Security, to provide advice on matters related to national security.

“We intend to not just speak about partnerships; we will demonstrate it in our policy-making process. I have met with a number of private sector persons, who have given their support. There are also some from the Diaspora,” said State Minister in the Ministry, Senator Pearnel Charles, Jr.

He noted that correctional services issues, among others, are some of the areas the committee is expected to provide technical assistance.

Charles was speaking to JIS News at the LASCO/Jamaica Constabulary Force (JCF) Police of the Year 2016/2017 award ceremony, held at the Pegasus Hotel in New Kingston, yesterday.

In his address, the Minister expressed gratitude to the Force for its work and lauded the LASCO Group for its recognition of the hard-working men and women.

Twelve men of various ranks were selected, based on their strong work ethic, excellent working relationship with the public and team members, community involvement, effective oral and written communication and demonstrable professional knowledge of operating procedures, among other elements.

A resident of St. Thomas, Corporal Pinnock holds a Master of Science Degree in Workforce Training and Education and a Bachelor of Education in Technical Vocational Education and Training from the University of Technology (UTech).

He was presented with a cash prize of $500,000 and LASCO gift baskets.

Following his acceptance of the award, the top cop lauded LASCO’s 16-year commitment to the development of the JCF and the nation at large.

Other prizes awarded went to First runner-up, Detective Constable, Dameian Haye, who walked away with $200,000 cash as well as a LASCO gift basket. Second runner-up, Odaine Williams, received $100,000 and a gift basket.

Meanwhile, Police Commissioner, Dr. Carl Williams, encouraged Corporal Pinnock to walk proudly with the banner of the JCF aloft. He added that the other 11 men are among the finest in the Force.

For his part, Founder and Executive Chairman of LASCO Affiliated Companies, Lascelles Chin, praised the bravery and courage of rank and file and senior members of the Force.

He also urged Corporal Pinnock to wear the LASCO badge of honour with dignity and “never by your action or lack of action, bring shame to it or the JCF.”