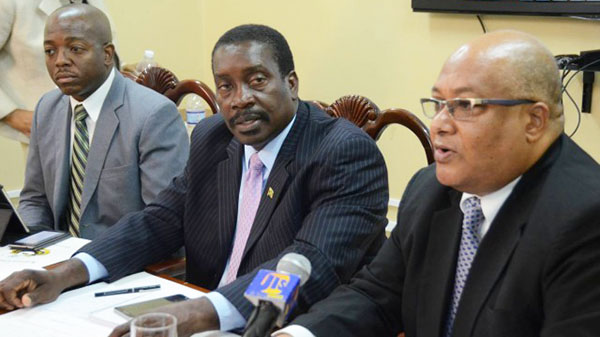 Photo above: Minister of National Security, Hon. Robert Montague (centre), and Minister of State, Senator the Hon. Pearnel Charles Jr. (right), listen to a point being made by Commissioner of Customs, Major (Ret’d) Richard Reese, during a meeting at the Jamaica Customs Agency’s Newport East location in downtown Kingston on March 29. Photo credit: Michael Sloley/JIS.

KINGSTON, Jamaica, Mar. 31, (CMC) – The Jamaica Customs Agency (JCA) will be implementing a tax stamp system, on a phased basis, for the monitoring of alcohol and cigarettes.

The system, will allow the authority to verify the authenticity of alcohol and cigarettes in trade, and trace the products on the market.

Commissioner of Customs, Major (Ret’d) Richard Reese, made the disclosure during an interview with the Jamaica Information Service (JIS) following a meeting with Minister of National Security, Robert Montague, yesterday.

According to Reece, the electronically-readable stamp will be placed on the products at the source.

He added, that once the Contraband Enforcement Team or the police conduct inspections or surveillance and detect alcohol or cigarettes without the requisite stamp, “those goods will be confiscated… and they will be forfeited and the individuals will be charged.”

“So anything that we find in your market that doesn’t have the tax stamp is in fact contraband…some countries include pharmaceuticals, because we have quite a few products such as Viagra and Cialis that are counterfeit,” he pointed out.

Reese explained that the JCA and Tax Administration Jamaica have long had concerns regarding the level of control, as it relates to alcohol and cigarettes.

The Ministry of Finance also has a similar concern,” he said, adding, that the initiative will protect revenue in terms of excise and customs duties.

Reese said, the implementation of that stamp tax regime will be announced shortly. “We have been doing our due diligence and consultations with the trade, and we have also had studies done,” he said.