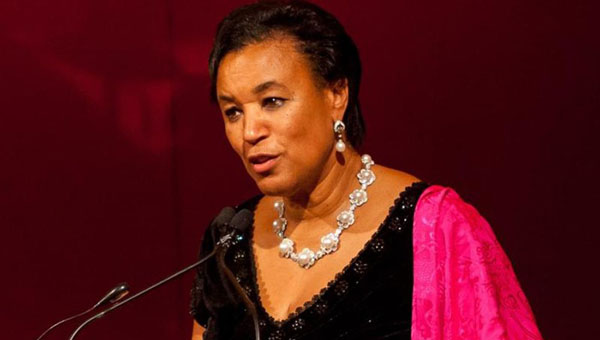 LONDON, England Apr. 4, (CMC) – The new Commonwealth Secretary General, Baroness Patricia Scotland, began her first day at work, today, to the rhythm of a steel band, the sound of a gospel choir, and the flair of Quadrille dancers.

“I will never forget the support, solidarity and love that you and so many others showed me along the way. It’s lovely to see so many people who were part of my campaign here today,” she told the welcoming ceremony at Marlborough House, while praising her predecessor, Kamalesh Sharma, “for a lifetime of dedication to public service and especially to thank him for his leadership of this organisation over the last eight years”.

The Dominica-born Secretary General, who also served as an attorney general in Britain and recorded a number of firsts during her career, said she was looking forward to where the next generation of female leaders will come from, “and the next and the next after that”.

“And I will be so happy when someone tells me I’m the second or the two hundred and second woman to be appointed to a post so many women have already qualified for.

“The Commonwealth I now serve covers a third of the globe’s population. That’s over two billion people across five of the world’s largest regions with more than half of them under the age (of) thirty,” she added.

She said over the last few years she has visited many countries across these five regions.

“I have spoken with political and faith leaders, men and women on the street, and, most importantly, to the young people about what they see as their biggest challenges, and what their hopes and aspirations are for the Commonwealth of the future.”

Baroness Scotland said that she wants as her agenda to “put the wealth back into the Commonwealth, but I also want to put the common back into wealth”.

She added, “There are four themes that I want to focus on as Secretary General. First, tackling violence against women and girls; this has always been a priority for me. Domestic violence affects one in three women across the world and, I don’t need to tell anyone here about the pain and lasting damage it causes, not just for those directly affected but for us all.”

“Violence and abuse robs children of the ability to develop and grow into their full potential and so it is literally stealing all our futures,” she said, noting that across the Commonwealth people have told her that “if we continue to allow women to be abused and disregarded then that has a huge impact on the social and economic health and wellbeing of our world”.

“If there is not peace in the home, there will not be peace in our world. Secondly, the existential threat of climate change. I come from a small island so this is something I understand all too well. And for so many of the Small Island States this is not about the future, we are living with the reality of climate change now and have been for decades.

“But people have also told me how working together can make a difference – put simply, we would not have the global climate change agreement without the work started by Commonwealth countries in the Caribbean and the Pacific, forward to the Commonwealth Heads of Government Meeting to success in Paris last November,” she said.

She said she also wants to deal with trade and good governance and, fourthly, encourage young people, particularly those below the age of 30. to understand their role in the socio-economic development of the Commonwealth.

“So many young people have shared with me their vision for a future that is bright and hopeful and we need to make sure they have the health, the security and safety, the support in social and cultural skills and education to make those dreams a reality so they are not tempted by the destructive agenda of the extremists.

“A confident Commonwealth and for us to do all of this, for the Commonwealth to be a beacon of knowledge, and understanding in the world, if we are to really meet the aspirations and hopes of all the people we serve, then we need to get our own house in order,” she added.