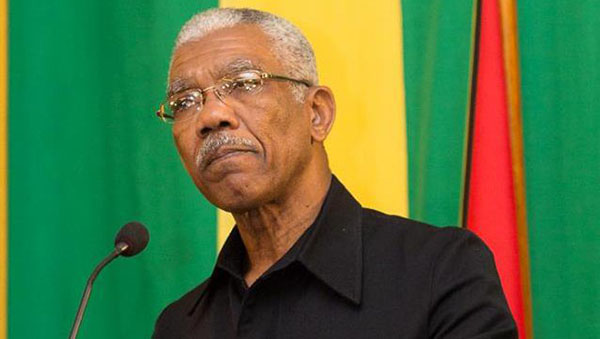 Photo above is of President David Granger. Photo credit: GINA.

Addressing the National Stakeholders Conference on Suicide Prevention, Granger told the audience that it was imperative Guyana implement measures, aimed at reversing the high rate of suicides, here.

Last year, 89 people committed suicide, and there have been several cases so far this year.

“I am disturbed, as any other Guyanese, with the high rate of suicide… I hope we leave this forum with better understanding of causes. Happy people don’t kill themselves,” Granger said, noting that Guyana had to do away with the label that it is the “suicide capital of the world”.

Granger reiterated a call for extensive research to be conducted, to determine the cause of the high rate of suicides in this Caribbean Community (CARICOM) country, noting that suicide is usually premeditated and not hastily or thoughtlessly done.

“It requires careful calculation, a cool head and steady nerves,” he said, adding, it is for this reason that the country must do research to find the causes before prescribing remedies.

“It is copycat conduct inspired by inclination to imitate a spectacular and staggering death. It aims to attract attention at the national and international level… stories about suicide are widely read. Every suicide is national news, it is international news,” Granger said, making reference to the media attention suicides receive.

He said the issue must no longer be treated like a spectacle.

“Suicidal persons dwell in a wilderness of unhappiness and distress. It is a major public health issue,” President Granger told the forum, noting the numerous initiatives attempted to address the epidemic over the years.

“Suicide is not the solution, it remains a seductively sparking symbol of an easy exit from depression and despair. Every suicide should be seen as unhappiness,” he added.

The World Health Organization (WHO) says Guyana has a suicide rate four times the global average, ahead of North Korea, South Korea, and Sri Lanka.