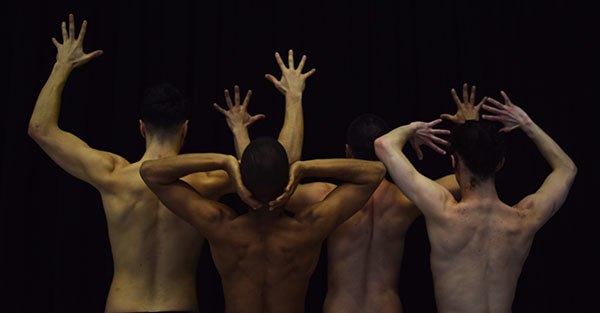 The Newton Moraes Dance Theatre (NMDT) will celebrate its 19th anniversary season with the world premiere of “Testosterone” on April 28 to 30 and May 1 and the relatively new La’ Riatsila Dance Theatre presents its second season, “Urban Shadows,” on April 16 and 17.

Both productions will be held at Dancemakers Theatre in the Distillery District in Toronto.

COBA, the Collective of Black Artists, recently featured its season of dance, “Legacy IV – Many Stories, One Voice,” at the Winchester Street Theatre, which focused on the lived experiences of persons with African lineage and roots suspended in physicality of movement, spirituality of time, music and tradition.

“Testosterone” is described as a theatrical laboratory, where “the dancers move beyond socially expected responses to the pressing issues of sexual politics, playfully expressing the myriad kinetic possibilities of hybrid humanity in a post-gender world.”

Shakeil Rollock, 23, who was born in Barbados and came to Canada at the age of 2, is one of the five male dancers – all of different origins and dance histories — that will showcase this production, which is the brainchild of choreographer, Brazilian-born Newton Moraes.

The other dancers are Emilio Colalillo, Falciony Patino Cruz, Jason Martin and Marco Placencio with Gabriel Cropley being the lighting designer.

Rollock is a multifaceted individual who describes himself as a “dance artist,” which means “someone who dances or is affiliated with dance but also does dance-related things such as choreography, producing, or even writing about dance – someone who is linked to dance.”

He has been dancing since Grade 10 and although starting off in theatre first, he found himself drawn to physical theatre than actual speaking. 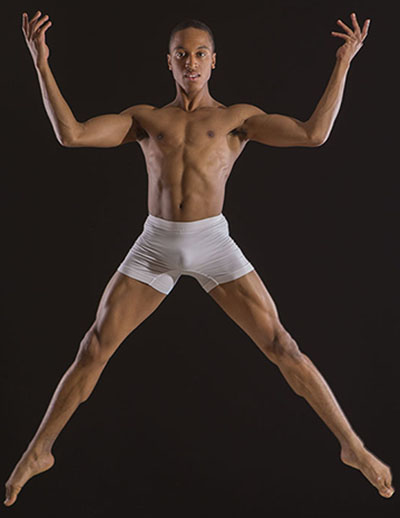 Speaking about his entry into dance, Rollock said he missed his bus one day and his friend told him that there was an audition for a boys’ team at their school, Sinclair Secondary School, in Whitby, Ontario.

He tried it out, loved it, and four years later the woman who taught him dance then, Lindsay Daniels, helped him to get into York University for dance.

“I found that with theatre it’s very character base, you have to audition for a role, “ said Rollock, noting that, “whereas with dance, it’s more about using what you have in front of you to create the work so that’s why I was more so drawn to dance than theatre.”

He adds, “Plus, it’s also dance using your body to speak. I’m actually like partially deaf so for me I feel more comfortable doing this [gesticulates a dance movement] than just doing this in terms of speaking. I found myself at that age drawn more towards movement than actual text.”

Rollock graduated from The School of Toronto Dance Theatre in May 2015 and said he has been extremely fortunate to be working every month since then without a break.

He was recently in Jamaica with choreographer Kevin Ormsby’s company, KasheDance, where they presented “Facing Home: Love and Redemption” at a dance festival at the University of the West Indies, Mona campus.

“Testosterone” is uniquely collaborative and Moraes describes the five dancers as being collaborators in the creative process.

“For me, in its simplest form, the work itself questions and challenges what it is to be a man and also the hormone, testosterone, how it affects us biochemically,” said Rollock.

He is very open to whatever Moraes “throws at us physically but also attempting to delve deeper into what it means and how I can relate to it myself.”

Rollock’s solo production, “What Lies Beneath,” which assesses himself as a person and what layers people see, layers people know, and what’s truly underneath correlates with Moraes’ “Testosterone.”

He has trained in ballet, contemporary, modern, hip-hop, step, house, and dancehall, and has created his own work for pre-professional and professional performances.

Regarding exploring possibilities within the realm of dance, Rollock feels that “sometimes people aren’t bold enough to explore beyond what they know, in terms of selecting dancers.”

He is constantly trying to find, not necessarily where he fits, but where he can put himself to mould and learn.

“I find when a choreographer is more about the movement and the quality of movement or more about the pedagogy of the process, like teaching a culture of style, those are the ones that I fit more to cause they’re not necessarily looking for a type of body, they’re looking for a willing dancer, a willing body, someone who is driven to move. And, I find the choreographers that are looking for dancers that are driven to move, I can get better out of it than the ones that are driven by technique or aesthetics.”

Rollock is drawn to choreographers, like Moraes, who is more about investigating and figuring out their own aesthetics or exploring movement.

“I’m extremely open, like never would I’ve thought I’d be touring and in companies and doing shows. I felt one of the worst in my class,” said Rollock, who upon graduating from the TDT spoke to the guidance counselor about his feeling that there was nothing for him in the city.

“Once I switched gears, I found how I can manoeuver in this crazy community and things are working, so where do I see myself in years to come. I know I’m going to be with dance in some way, shape or form, whether it’s teaching, choreographing, performing, administrative work,” said Rollock, who noted that he will not be opening up a studio, but his partner who is also a dancer, wants to open one.

The Pan Am Games was a catalyst for his dance career as he was working with TDT right after finishing school and Cirque du Soleil, and then the closing ceremonies, and has been on a roll ever since.

“One of the best pieces of advice I got was in my, like, first or second year. It’s like, ‘they never say no so just ask,’ cause it’s true, no one in this community actively says no. I’ve asked, regardless of their stature in the community, I’ve asked countless choreographers for coffee dates, everyone said yes. The one person that said no didn’t actually say no, they just stopped replying. Even the ones that didn’t follow through still said yes,” he said.

Rollock said he is not afraid to approach choreographers and he believes in being genuinely curious in asking them about the process of their work.

Moraes, the founder, choreographer, teacher and artistic director of NMDT, was born in Porto Alegre, Brazil. At an early age he started dancing samba, and then studied physical education at the Unisinos University in Porto Alegre.

Later, he studied Afro-Brazilian dance, jazz and street dancing. In 1991, he moved to Toronto where he studied modern dance with many choreographers and started his own company in 1997.

The NMDT is a company dedicated to the creation, performance and production of contemporary dance works to explore, maintain and develop the links between the arts of Canada and Latin America through the artistic vision and knowledge of Moraes.

This, especially, includes the examination of Brazilian culture and the development of new forms of contemporary artistic expression.

Moraes, 54, is a graduate of TDT, where he started creating some dances but never thought that he would become a choreographer or the artistic director of a dance company. He created his company after realizing that there were no Brazilian professional dance companies in Toronto.

“Each of my dances, always, is related to something that intrigues me or I think that we need to talk about. I am very feminist; I think men and women should have equal rights for everything.”

Moraes is curious about changes in roles where for some men, who were breadwinners over the years, things might have shifted and they now stay home and take care of the kids, while their female partners work outside of the home. He noted that even the LGBTQ community and metrosexual men could express themselves in any way they want to in this society.

“Testosterone is also about talking about the lack of testosterone, how it affects men. That’s when I start reading a lot and talking with some friends who have great knowledge about that. We have more tendency to become sick when we don’t have a normal level of testosterone and many other things, hair and body, density of the bones and so on, and also the sexual appetite,” he said.

Moraes said when there is excess testosterone there is rage, fights, but also “some positive things like men taking care of themselves, muscles, and all the rest.”

He is questioning whether the world might become a place where people will talk about who they are as humans instead of asking, “what’s your gender, what’s your sexuality and stuff like that. I think maybe this will be part of the past in the future.”

Moraes says the production will be his most daring and the riskiest work he has ever done with a lot of physicality, nuances, and being more experimental.

The production celebrates Afro-Caribbean culture by highlighting styles that often remain unseen in theatre, or their enjoyment is reserved for culturally-specific audiences. A total of six pieces, ranging from Afro-jazz to dancehall, will be presented at the showcase. 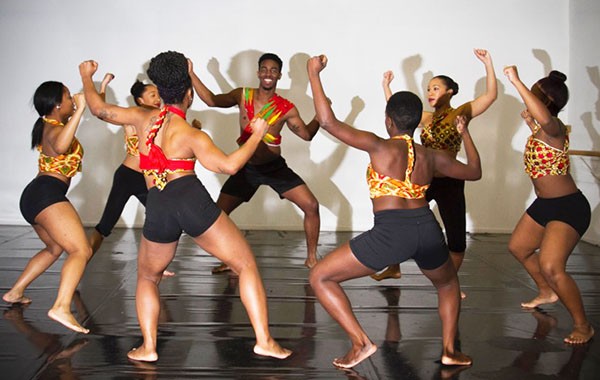 Some works push the boundaries of tradition and beliefs through fusion of styles and contradiction.  Others, such as the modern selections, speak to movement, energy, and relationships within space.

The play of culture and history comes alive through the artistic director, Alistair Graphine’s unique use of movement.

Legacy IV – Many Stories, One Voice

The 2016 season at COBA investigated collective social consciousness and awareness and its relevance today to how stories help in creating one voice to tradition, history and purpose of future.

COBA’s technique is rooted in the African aesthetics of presentation.

Legacy IV also featured COBA’s musical ensemble; an integral part in much of the company’s choreography grounded in the wide range of African / Caribbean aesthetics.

“It explores the human condition to reveal the pioneering spirit deep inside each and every one of us. Spirit is the divinity that pulsates, dances, and flows as the source and essence of every soul. The spirit is often akin to fear of the unknown: however “Spirityouall Essence” is the search or strength on the journey towards self-discovery.

“Spirituality runs deeply into the heart of every matter and extends far beyond the physical world of matter. Therefore, the work questions if our spirits are cultivated over time through rituals and practice, or are we socially spiritual? And if we all have our own spirit, are there many spirits? “Spirityouall Essence” searches to connect to the profoundly powerful and divine force that is present in this universe,” said a press release.

“Meme: #Faith #Hope #…” which premiered in 2015, revisits the need to address subjectification of females.

Prompted by the abduction of the Nigerian school girls by the Boko Haram, the “Bring Back Our Girls” campaigns, which have since petered off for other global stories, the work goes further into the struggles and fears tangled within the incident.

“Diallo” is a work of self-expression through music, song and dance. The title comes out of the West African tradition meaning bold and the production follows in that tradition, featuring a symbiotic marriage of virtuoso dancing and drumming where the lines of musician and dancer become blurred.

Masterfully crafted by Headley-Lindsay, “Diallo” is a collaborative work, which evolves out of Doun Doun Dance, originally created by Sis Robin Hibbert in 2007.

Headley-Lindsay has enlivened the re-creation with a youthful and bold presence that is absolutely breathtaking.

COBA is dedicated to the preservation of the cultural traditions of Africa and the African diaspora.

At the front of dance education, preserving and innovating on Africanist movement aesthetics for over twenty years, COBA has the distinction of being the only company in Canada with a specialized training method developed in the 21st century.