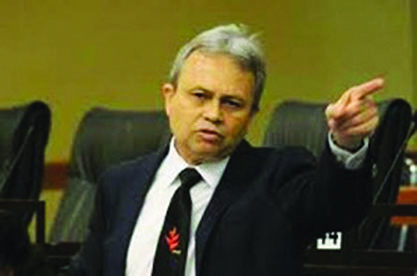 Trinidad and Tobago Finance Minister, Colm Imbert, said "contrary to the statements made by the Guardian Media Group and by Fitch Solutions, there will be no devaluation of the TT dollar in 2019”.

PORT OF SPAIN, Trinidad, Apr. 10, (CMC) – The Trinidad and Tobago government says it has shelved plans for a multi-billion dollar mass transit project, given the economic problems facing the oil-rich twin-island republic.

The former People’s Partnership government of Kamla Persad Bissessar had warned that the project would cost TT$22 billion (One TT dollar =US$0.16 cents) and would bankrupt the country.

Finance Minister, Colm Imbert, told legislators that it was the intention of the Keith Rowley government to build the project, but the depressed oil and gas prices on the global market have made it difficult to follow through on the election promise.

“As we indicated during the 2015 election campaign, it was our intention, upon assuming office, to immediately request technical assistance from the Inter-American Development Bank to review the cost and feasibility of this project.

“We have done so, and it has been determined, by the experts at the IDB, that the proposed mass transit project is expensive and not feasible at this time, in the present environment of severely depressed oil and gas prices.”

Imbert said that if oil prices were still US$100 per barrel, it would be a different story, but with oil at US$37 per barrel, “we simply cannot, as a country, afford to proceed with this project at this time.

“Accordingly, we are shifting focus towards improving our road infrastructure in order to ease traffic congestion and to assist the travelling public, we will also put more public transportation vehicles on the road, thus facilitating public transport at subsidized prices,” he told legislators during the mid-year review, last Friday.

Imbert said that some of the road improvement projects will be started immediately since “most of these projects have the advantage that they have already been designed and are ready for the immediate invitation of tenders, while others are in an advanced stage of preparation.

“And as we proceed into 2017, it is our intention to construct interchanges at all major intersections along the Churchill Roosevelt Highway all the way to Piarco in the first instance, as this is one of the country’s most heavily trafficked roads, as well as a number of other improvements to heavily trafficked areas in and around Chaguanas, Diego Martin and Tobago, among other areas,” Imbert added.

Last Friday, the Finance Minister also announced a revised national budget, outlining a raft of new taxes, as it moved to deal with a drastic decline in revenue as a result of a decline in oil prices on the global market.

He told legislators that the Keith Rowley government is now expecting to spend TT$52.7 billion (One TT dollar =US$0.16 cents) during the fiscal year, down from the TT$60.3 billion figure that had been outlined when he presented the fiscal package in October last year.

But in an immediate response, Opposition Leader, Kamla Persad Bissessar, told Parliament there was nothing new in the fiscal package outlined by the government, adding “it takes us nowhere, we are no better off”.

In a mid-year review of the economic situation in the cash-challenged island, Imbert also announced that the government would be phasing out the fuel subsidy, which he said, had amounted toTT$31 billion dollars over the last 10 years.

Imbert also said that the new policies were aimed at preventing the country from having to go to the International Monetary Fund (IMF), reminding the population “one can’t spend money one does not have”.

He told legislation there should be no illusion that Trinidad and Tobago has found itself operating in a “different environment” and that ‘it is no secret the economic environment has turned out to be worse.

“We must avoid an IMF program at all costs,” Imbert said, noting that official figures have shown that the country had recorded no economic growth in 2015 and should record a further decline in 2016.

“We are no longer as wealthy as we were before, we must now exercise restraint and fiscal discipline,” he said, adding that “if anyone doubts it, the change in the global economic environment has caused a profound transformation”.

Imbert revealed that there will be a seven per cent levy placed on goods and services ordered online, saying “this is not a new concept and is a well-established precedent for a tax of this nature in countries such as the USA, the UK and New Zealand”.

He noted the measure would also help in the foreign exchange situation “since credit cards transactions are paid almost immediately.

“This tax is intended to decrease foreign exchange outflows…reduce revenue leakage, assist local manufactures and local service companies to compete with overseas retailers. This measure is scheduled to take effect by September 2016 and would require discussions with the banks and the credit card companies in order to make it work,” Imbert added.

He stated the government also intends to increase, by 50 per cent, customs duties on luxury motor vehicles, starting with private vehicles with an engine size exceeding 1990cc’s.

“This measure will take effect immediately, “Imbert said, adding there would also be better collection of taxes from the gaming and gambling industry, under existing legislation.

He said the government will also increase taxes on alcohol and tobacco products taking effect in May 2017 after the passage of the Finance Bill.

But he told legislators that all these new taxes, including the payment of property taxes that had been suspended since 2009, will not have the effect of easing the budget situation.

Imbert said that the shortfall in revenue included taxes from oil companies TT$52.4 billion, other companies at one billion “due in no small measure in the downturn in the energy sector”.

He said, while the government continues to reduce expenditure and cut waste, the government, for the remainder of this year, will have to meet the arrears owed to public servants.

“In this regard I wish to confirm it is the government’s intention to pay 50 per cent of the outstanding arrears of salaries to public officers by June 2016. The remaining 50 per cent will be paid in interest-bearing government bonds at the end of September, or in two further instalments in cash in 2017, at the option of the workers.”

He said the government also needed to provide for the increase in capital expenditure to set the platform for future growth.

Regarding the removal of the fuel subsidy, Imbert said it was necessary now to hold a public dialogue on the issue as a matter of priority.

He said for years Trinidad and Tobago has been importing “expensive oil” on the world market for refinery and “sold to the public at a loss.

“That is what this country has been doing. Import oil from other countries to run the refinery, pay world market prices…and sell it at a loss,” he said, indicating that both super gasoline and diesel will now be sold at a 15 per cent increase.

“It means that super gasoline will no longer be subsidised at current oil prices while diesel will continue to be subsidised at one dollar per litre. Government’s intention, over time, is to introduce a new regime for fuel so that the price of fuel will go up and down based on the international prices of oil petroleum products as obtained in most countries,” Imbert said.

But he said, on the flip side, the government intends to remove all taxes CNG vehicles and electric cars with engine sizes of 1999cc.

“So customs duty, value added tax…will be exempt for CNG vehicles, electric vehicles and hybrid vehicles. The government will also begin the process of converting all government vehicles to CNG or alternative fuels,” he added.

Imbert said that despite all these revenue measures the government will still face a significant gap between current revenue and expenditure of TT$15 billion.

“In 2016, we intend to close this 15 billion dollar gap with borrowings…extraordinary income such as proceeds from the sale of CLICO assets, repaying of past lending from RGU, dividends from NGC (National Gas Company), draw-downs from the Heritage and Stabilisation Fund, and the proceeds from the Phoenix Park IPO.

“Our objective Madam Speaker is to conserve jobs, protect jobs and maintain economic momentum,” he said, adding that in the next year, the government will resort to further borrowing.

“We will also have to resort to further draw-downs from the Heritage Stabilisation Fund,” he said, adding that by 2018, the gap between revenue and total expenditure must be reduced significantly.

“All things being equal therefore, if our revenue position does not improve, significantly, over the next two years, we will have to cut expenditure, by 2018, to TT$55 billion.

The debate on the measure is continuing.