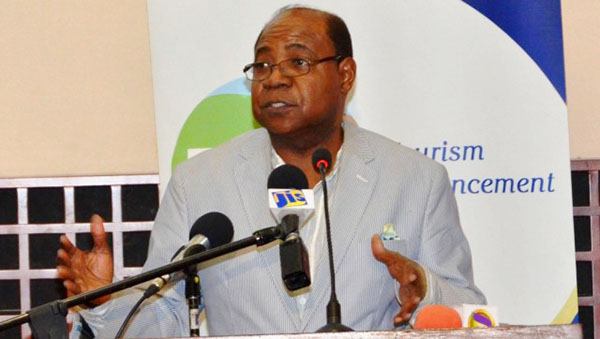 Photo above: Tourism Minister, Edmund Bartlett, addressing newly appointed Board members of five of the entities falling under his portfolio, during an orientation seminar at the Montego Bay Convention Centre in St James, on Saturday, April 9. Photo credit: Sharon Earle/JIS.

KINGSTON, Jamaica, Apr. 12, (CMC) – The Jamaica government has outlined five key pillars on which the vital tourism sector will serve as a major catalyst for economic growth, over the next five years.

“We want to have five per cent growth (annually)…over the next five years…to put tourism at a point where you have three million stopovers and you (are) earning (upwards of) US$5 billion,” Bartlett said.

He said this would increase the demand for goods and services to be provided locally, while “building out the absorptive capacity of Jamaicans to benefit from this demand”.

Bartlett, addressing the newly appointed board members of five of the entities falling under his portfolio, in Montego Bay last weekend, said “when tourism grows, the economy grows”.

He cited Mexico and the Dominion Republic as examples of countries that have recorded significant success in this regard.

Bartlett, who took up office following the February 25 victory of the Jamaica Labour Party (JLP) in the general elections, said both countries have demonstrated how small entrepreneurs can become direct contributors to, and beneficiaries of, tourism, alongside larger foreign investors.

As such, Bartlett underscored the need for Jamaican investors and entrepreneurs to position themselves as providers of the inputs to the industry, pointing out that they are “capable of putting together an experience that people would want (to partake of).”

While noting that the industry’s offerings were diverse, the Minister nonetheless acknowledged that some areas need to be further developed in order to strengthen the tourism product and brand Jamaica.

“With new products, we will bring new players into the business… (and) new investments …naturally…follow new products; and where the money goes, the people follow. So investment is not just a tool to enhance capital formation, but it is also a marketing tool,” he argued.

As such, Bartlett said attention will be placed on strengthening existing markets, particularly in North America.

He said the major focus will be on the United States, where Jamaica currently only derives between 1.5 and 3.5 per cent of its combined cruise ship and stopover visitor arrivals.

Additionally, Bartlett said the government will be seeking to tap into new markets where the ‘passion points’ – or reasons for travel – are strong; as also where connectivity can be achieved through partnerships involving airlines, cruise lines, and tour operators, among other tourism stakeholders.

Bartlett said achieving growth in the industry will also depend on human resource development, which he cited, as pivotal in creating Jamaica’s destination assurance profile.

He explained that this will guarantee that the experience visitors derive for money spent is provided by a trained workforce that delivers above and beyond expectations.

Bartlett added that other key areas of focus include: the establishment of a Tourism Hospitality School, and craft institutes to enhance service standard and product variety; and establishing standards that ensure the safety and security of visitors.