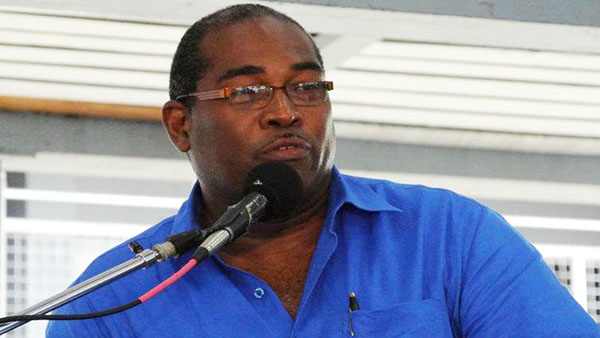 Photo above: Nigel Hughes, an attorney, who resigned as Chair of Guyana’s AFC political party. Photo courtesy of Guyana Graphic.

GEORGETOWN, Guyana, Apr. 12, (CMC) – The Alliance for Change (AFC) has denied suggestions that its chairman, Nigel Hughes, has submitted his resignation because he does not agree with a weekend statement issued by the minority partner in the coalition government in Guyana.

The party confirmed that Hughes, an attorney, had resigned during a statutory Management Committee meeting of the party on Monday.

The statement gave no reasons why Hughes stepped down, noting only “Chairman Nigel Hughes made an announcement with regard to his Chairmanship of the party”.

AFC leader, Khemraj Ramjattan, is expected to meet with Hughes, later today, in a bid to get him to rescind his resignation.

The party said it will make no further statement on the matter at this time.

Over the weekend, the AFC said while it reiterates its commitment to the David Granger administration, it wants to underscore that “the principles of good governance, transparency and equal opportunity are fundamental to the success of the coalition”.

The AFC, which together with A Partnership for National Unity (APNU) forms the government, said that it held a leadership retreat over the weekend “as part of an ongoing effort to review the party’s performance and to discuss a number of issues of concern to the party”.

It said, principally, the AFC reviewed and considered internal matters with regard to the party’s operations and structure along with its role as part of the coalition government .

The AFC said that among the matters discussed at the retreat was the issue of the appointment of a Ministerial Advisor on Business Development by the Minister of State, Joseph Harmond, and other revelations in the public domain.

Last month, President Granger announced the dismissal of contractor/businessman, Brian ‘BK’ Tiwari, as a ministerial adviser after apparently being unaware of his appointment in the first place.

The party said also that the report of the Commission of Inquiry into the death of Walter Rodney should be released to his family and the party supports its early release to the public.

Rodney, the leader of the Working People’s Alliance (WPA), a member of the coalition, was killed on June 13, 1980 by a bomb while he sat in a vehicle.