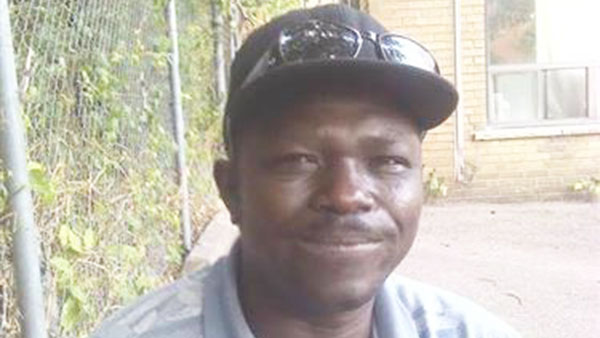 The late Andrew Loku, who was shot by Toronto police on July 5, 2015. Photo credit: submitted image.

Loku, 45, died on July 5, 2015 in Toronto, of injuries sustained when he was shot by an officer of the Toronto Police Service.

The Coroner’s office said, in a media release that ‘The inquest will examine the events surrounding Loku’s death and the jury may make recommendations aimed at preventing similar deaths.”

Local civil rights activist group, Black Lives Matter-Toronto (BLMTO), which has been fighting for justice for Loku and his family, applauded the Supervising Coroner’s announcement.

“We are finally seeing some concrete action from our Province.” said Rodney Diverlus,

co-founder of BLMTO, in a media release.

“This is a major victory for Loku’s family and community, and has been a long time coming. Following #BLMTOtentcity, we gave government officials 300 hours to respond to our demands. This is a step forward in the right direction.”

#BLMTOtentcity was the name given by BLMTO to the organisation’s 14-day occupation of Toronto Police Headquarters.

It also included a “series of rallies, vigils, and marches that brought out thousands of Torontonians and a wave of national and international support, calling for justice for Andrew Loku, and an end to anti-Black racist policing”, said the release.

One of those demands, a Coroner’s inquest, has been called for by numerous Black advocacy organizations, including the African Canadian Legal Clinic (ACLC), said the group. “Given the lack of public accountability and secrecy shrouding the SIU investigations, an inquest will allow for a more critical look into the tragic events that led to Loku’s death last summer,” it added.

Sandy Hudson, co-founder of BLMTO, said of the Coroner’s announcement, “This is a time to celebrate the power of the Black community in the face of injustice, death, and derailment.

“We are still mourning over the injustice and what it took to move the hand of the province, and hope that this signifies a stronger commitment by the Province to work with community in seeking justice for Andrew Loku, and all other victims of police violence.”

Although applauding the province and Dr. Edwards’ for the inquest, BLMTO is calling for action on its remaining demands:

> The immediate release of the name(s) of the officer(s) who killed Andrew Loku and charges to be laid accordingly;

> The immediate and public release of any video footage from the apartment complex where Andrew Loku was murdered;

> An overhaul of the province’s Special Investigations Unit, in consultation with families of victims of Police violence, the Black community, and the community at large;

> and a commitment to the full elimination of carding, including: the deletion of all previously recorded data; reframing of regulations to prohibitions; consistent implementation of policy amongst different police boards; and concrete disciplinary measures for officers who continue to card.

Details regarding the date and location of the Coroner’s inquest will be provided when the information becomes available, promised the Coroner’s media release.