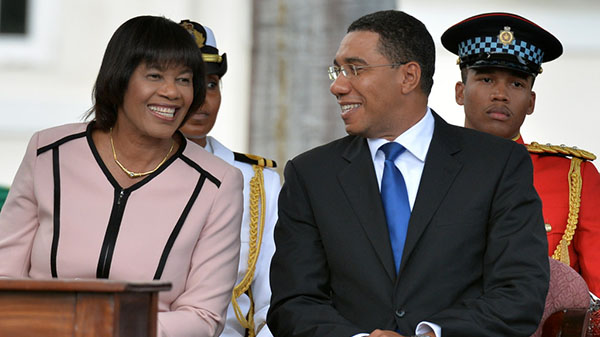 KINGSTON, Jamaica, Apr. 20, (CMC) – The main opposition People’s National Party (PNP) has accused the near two-month old government of merely adopting the policies of the last administration, and that the Andrew Holness administration has “no clear plan for economic management and growth”.

In addition, former Prime Minister, Portia Simpson Miller, told a news conference, yesterday, that she doubts whether or not the ruling Jamaica Labour Party (JLP) will fulfil the electoral promises it made during the campaign for the February 25 general election.

Simpson-Miller said that the Throne speech, last week, in which the Governor General, Patrick Allen, outlined the priorities for the new government in the coming year, contained nothing new and was merely a continuation of the her party’s “legacy”.

“From the Throne speech it is clear that, despite their many election promises, the government has created few policies and programs. The Thorne speech and the estimates that have been tabled, are major endorsements of what we did in government,” the PNP leader said, adding “they represent an endorsement of the policies and programs of the PNP and a continuation of our policies”.

The government has already said that it cannot now implement the plan to abolish income tax for people earning J$1.5 million (One Jamaica dollar =US$0.008 cents) annually, saying that the funds to do so were not available.

But Prime Minister Holness has said that his administration will stick to all commitments made during the campaign.

Meanwhile, former Finance Minister, Dr. Peter Phillips, is calling on the government to indicate whether it is in conformity with the agreement the island signed with the International Monetary Fund (IMF).

In 2013, Jamaica entered into a four year US$948.1 million Extended Fund Facility (EFF) agreement with the IMF, and Phillips said that the party’s concerns were raised following comments by Dr. Uma Ramakrishnan, the IMF’s Chief of Mission to Jamaica.

Phillips argued that it was unusual for the Estimates of Expenditure to be presented while the IMF Chief of Mission has concerns. He said it is time the government speaks to the Jamaican people “clearly, in unambiguous terms” about their plan concerning the IMF agreement

“This is not to say that the government of Jamaica cannot chose to depart, but…if they are choosing to depart from the Fund agreement they need to make it clear,” he told reporters.