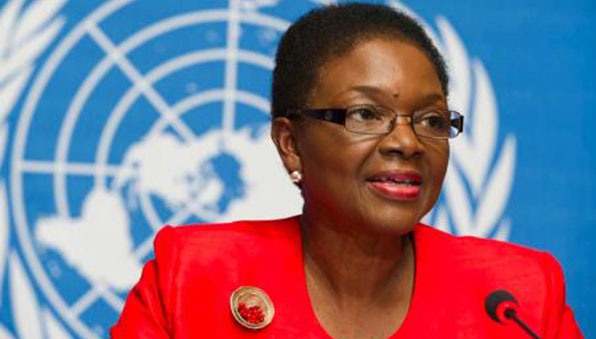 The Guyana Jubilee New York City Committee, organizers of the June 4 – 12 event, today, said the Guyana-born Amos, current Director of The School of Oriental and African Studies (SOAS), University of London, will be among the honored guests at the celebrations that include Guyana’s President, David Granger, and Prime Minister, Moses Nagamootoo.

Amos, who hails from Wakenaam Island in Guyana, served as Executive of the British Equal Opportunities Commission from 1989 to 1994.

She became the first Black woman to serve in the British Cabinet after being appointed Secretary for International Development in 2003 by then British Prime Minister, Tony Blair.

Blair subsequently appointed her leader of the House of Lords, serving in that capacity from 2003 to 2007.

Committee Chairman, Rickford Burke, said the highlight of the week-long program will be a black-tie state dinner on June 11, at the Sheraton New York Time Square Hotel and Towers, during which Granger will deliver the keynote address.

Burke said that the celebration will showcase Guyana’s rich history and culture.

“This is a time to celebrate our rich heritage and uniqueness as a people,” he said. “We plan to unite Guyanese all over the United States to join us and celebrate this milestone in harmony as one people.”

He added that his mission is “to promote the history and vibrant cultures of Guyana, foster national harmony, fortify identity and enhance Guyanese influence in the United States.”

June 8 has been declared “Guyanese Volunteer Day” in New York, in which Guyanese medical doctors, other healthcare providers and lawyers will “give back to local communities by conducting free medical clinics and providing free legal services at various locations in Brooklyn, Queens and New Jersey.”