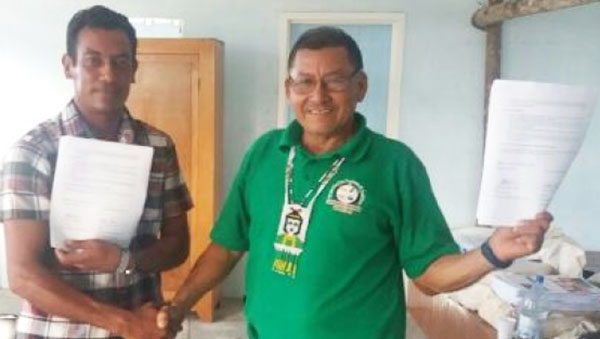 Vice President and Minister of Indigenous Peoples’ Affairs, Sydney Allicock, right, and Toshao of Potarinau, Nicholas Fredericks, shake hands after the signing of the Terms of Reference. Photo credit: GINA.

Critical Issues Affecting Hinterland Communities In Guyana To Be Addressed

GEORGETOWN, Guyana April 26 (GINA) — The Wapishana people of South Rupununi, Region Nine, recently signed a terms of reference (TOR) with the government of Guyana, to address serious issues affecting them.

This TOR followed the Wapishana people writing to President David Granger to have formal discussions on matters related to land traditionally occupied and utilised by their ancestors.

He was accompanied by Mervyn Williams, Advisor to the Ministry of Indigenous Peoples’ Affairs; David James, Special Assistant and Legal Advisor to the Ministry; Enrique Muniz, Head of the Amerindian land titling project; and, Richard Van West-Charles, Chief Executive Officer of the Guyana Water Incorporated (GWI).

The Wapishana people were represented by a number of toshaos, deputy toshaos and senior councillors. Chief among them was Nicholas Fredericks, toshao of Shulinab. Also present was an attorney-at-law from New Zealand, who specialises in indigenous rights issues.

After two days of deliberations, the two sides agreed on a set of terms to guide the official consultations, and the TOR was signed in the village of Potarinau.

The question of land, rights to land, mining and economic activity versus conservation and environmental protection, water security, access to communities, security, government support and involvement of villages were discussed.

After the signing, Toshao Fredericks pointed out that for many years, attempts were made to formally engage government in these talks, but very little attention was paid to the appeals of the Wapishana people.

He added that indigenous peoples over the centuries have preserved the natural environment and now, “We are the ones who suffer the worst effects of climate change”.

He told the government team that they are happy that this government has expressed a willingness to engage them, with a view to finding solutions to their issues.

Minister Allicock told the Government Information Agency (GINA) that the TOR is one which the Ministry will be guided by, in its quest to support the development of the Indigenous peoples.

Allicock took the opportunity to emphasise that land is an important issue, and that attention must be paid to important details.

The TOR agreed that the Amerindian Act be strengthened so that the interest of indigenous peoples could be better addressed.

Minister Allicock explained that a plan will be established on the way forward, especially for the management of economic activities and to ensure there is a continuous program when the village council’s term is ended.

The Minister said he is looking forward to meeting with other Indigenous groups to develop similar partnerships.

Meanwhile, the Ministry and the United Nations Development Fund (UNDP) recently concluded discussions within the communities of Baramita and Santa Rosa, Region One; Orealla, Region Six; Paramakatoi and Kato, Region Eight, Parabara and Shulinab, Region Nine; and Rockstone, Region Ten; on the creation of a handbook titled, ‘Understanding Amerindian Rights and the Land Titling Process’.